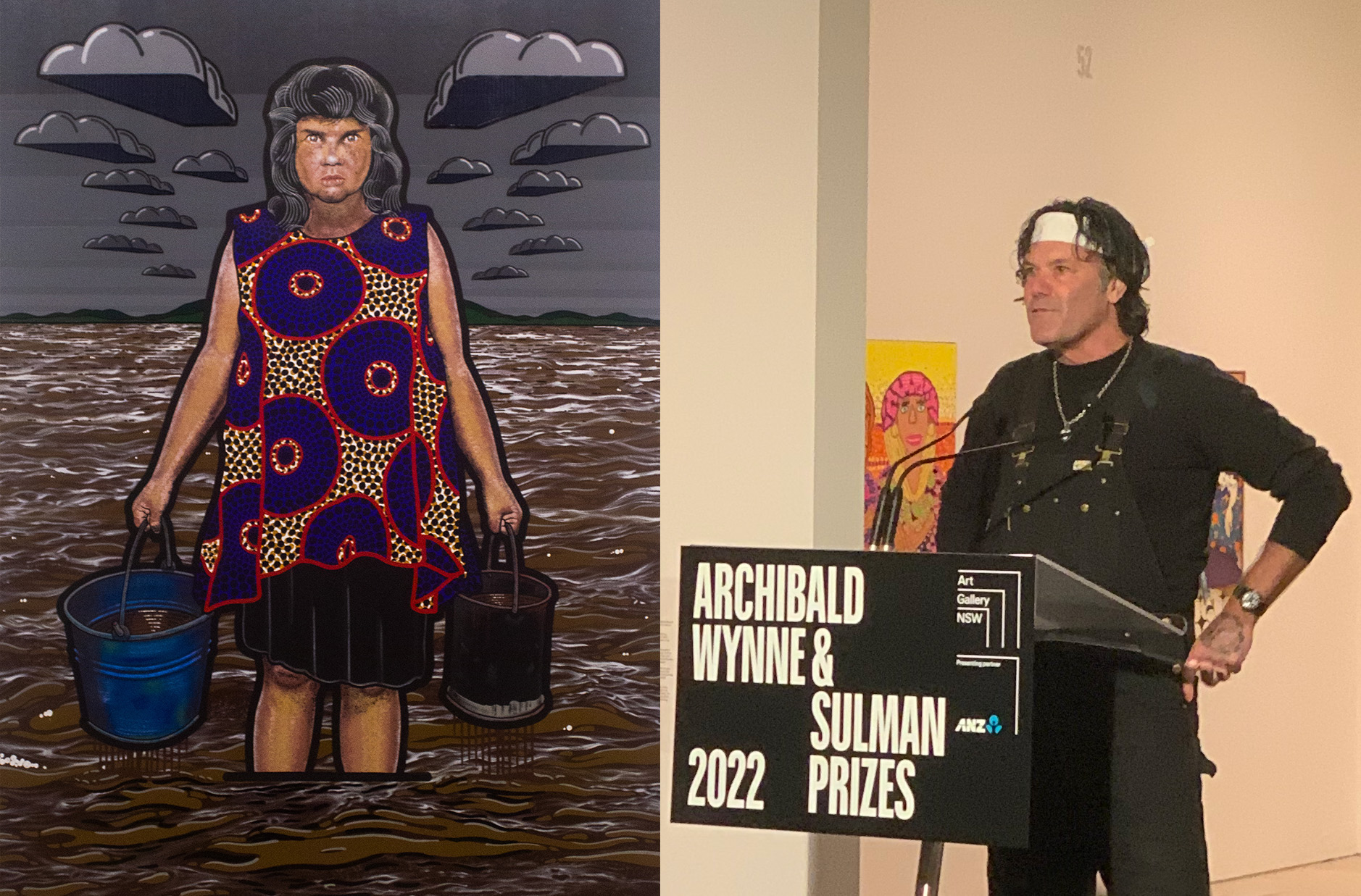 Yesterday, artist Dhungatti Blak Douglas received the 2022 Archibald Award and $100,000 for his work Moby Dickens — the largest painting in this year’s exhibition at the Art Gallery of New South Wales (AGNSW).

Douglas is a six-time Archibald finalist and 2009 Wynne Prize finalist, known for his portrayal of First Nations people. “I am catching up on the ground lost by the failure to honor the people of First Nations,” said the artist who lives and works in Bundjalung Country in Lismore.

In his acceptance speech, Douglas highlighted that “this is incredibly historic as I am the first Koori to paint a Koori to win the Archibald Prize”.

“This painting represents 20 years of taking the risk of chasing a dream,” Douglas said.

The winning portrait depicts Wiradjuri woman and artist Karla Dickens, knee-deep in muddy floodwaters. According to Dickens, it is a tribute to every person who found himself “at the bottom of the mud, physically, emotionally, mentally and financially after the natural disaster that destroyed so many lives on the rivers of northern NSW and beyond”.

The monumental work combines elements of realism and graphic styles to create a unique aesthetic. Muddy waters and dark storm clouds stretch in the background almost indefinitely, and Dickens’ bold eyes reflect a deep challenge of anger as he gazes at the weather disaster in this country.

The title of the work is a reference to the 1851 novel by Herman Melville Moby Dick. Here, in Douglas’s pictorial reflection, Karla Dickens represents the titular whale of the story who is “ready to rip off any fool’s leg with a harpoon who dares to come too close.”

The “flat-bottom” graphic clouds in the painting’s sky are a recurring political motif in Douglas’ work. Its flat bases represent what Douglas describes as the “false roof of government”. Additionally, the 14 clouds represent the number of days that rain and flooding devastated the Northern Rivers region. Water leaks through the ineffective buckets in Dickens’ hands, serving as an allegorical representation of the climate crisis that slips through our hands and the nearly insurmountable challenges it poses to communities.

It is gratifying to see the award being awarded not only to a First Nations artist and subject, but also to a strongly political painting at a time when it is most in demand. Douglas is an undeniable visionary in his artistic practice and philosophy — Moby Dickens is set to become an Archibald icon for years and decades to come.

Before the award announcements, Emma Grey, ANZ Group executive, spoke on behalf of ANZ: “Archibald is part of the cultural fabric of this country”. ANZ has been a sponsor of the Gallery and a presentation partner of the Archibald Awards for 13 years.

David Gonski, President of the Art Gallery of NSW Trust, presented the awards and emphasized that while “[the board of trustees] there was a lot of discussion and a lot of robust debate” all final decisions made about the winners were “all made unanimously”.

“Australia’s creativity continues,” he declared before announcing Claire Healy and Sean Cordeiro as the winners of the $40,000 Sulman Award for their work. Raiko and Shuten-dōji.

Healy and Cordeiro’s winning work is a retelling of the Japanese folk story of the fight between the warrior Raiko and the demon Shuten-dōji. Materiality is perhaps the most notable aspect of this work, painted on the ‘fuselage’ – the main body of an aircraft – of a Vietnam War-era helicopter. In addition, the work has attached jute strands that extend throughout the work from a single braid like a web, creating a visually interesting and dimensional facade.

The award was judged by artist Joan Ross, who said of the collaborative duo’s work that she “immediately felt the dynamism of this work, its curved metallic surface, its physical quality and beauty, its conceptual nature”.

The $50,000 Wynne Prize was later announced and given to Nicholas Harding for his work It was — who exclaimed that it was “quite wonderful and unexpected.”

Harding is a 19-time Archibald finalist (winning in 2001), a 9-time Wynne finalist, and a 3-time Sulman finalist; this year, his winning work is an oil-painted landscape in dominant shades of earthy green and brown. The work’s leafy images are an abundant amalgamation of plant life from the Northern Beaches and Lakes Narrabeen area. Investigating the ways nature has been shaped by colonization and the impacts of industry deforestation, Harding’s work contains a clear message and is a well-deserved award winner.

Ultimately, the winner of the Roberts Family Aboriginal and Torres Strait Islander Prize of the Wynne Prize was the painting by Pitjantjatjara’s wife Sally Scales entitled Wati Tjakura. The vibrant work is a representation of her ancestral family land ‘Aralya’ in South Australia in Aṉangu Pitjantjatjara Yankunytjatjara (APY) Lands.

The 2022 Archibald, Wynne and Sulman Awards open to the public today. For more information on this year’s Outstanding Awards and Finalists, read Honi’s review. on here.