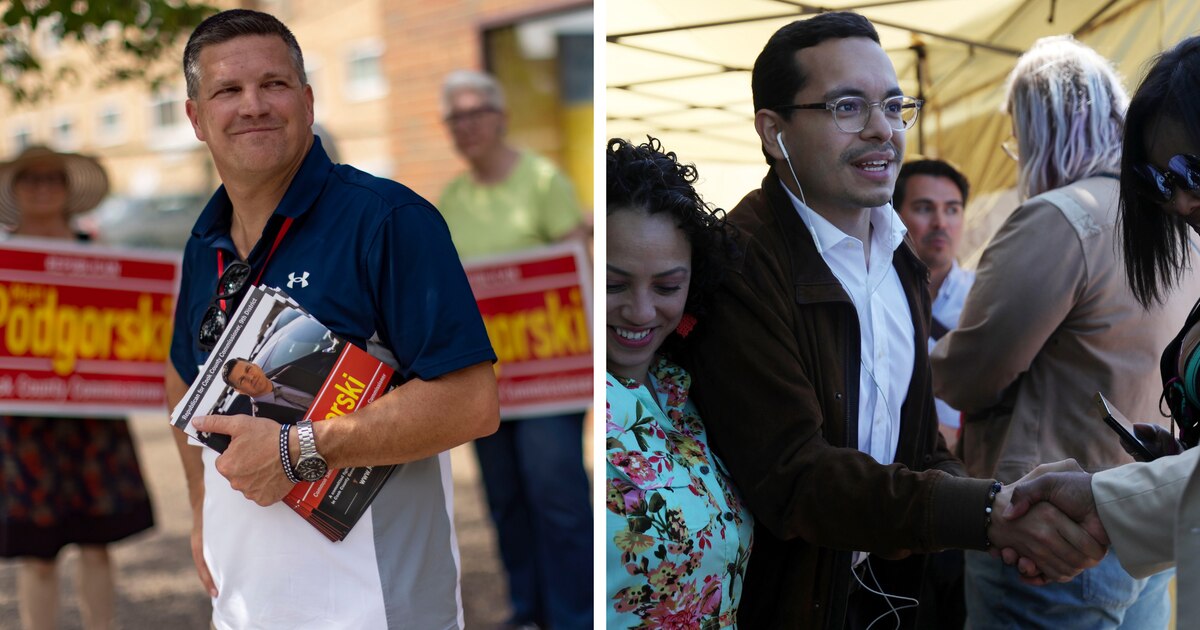 With all 17 seats on the Cook County Board of Commissioners up for election this year, party leaders on both sides of the aisle say they are optimistic about the chances of gaining ground in November.

But early voters must determine their respective parties’ nominees in Tuesday’s primaries.

This year’s election cycle follows a once-a-decade redistricting process that — unlike Chicago ward and state legislature remaps — saw little conflict in the Democrat-controlled County Council, led by President Toni Preckwinkle, who is also running for another term.

And while those races are less visible than other offices up for grabs this year, county commissioners manage an $8 billion budget that funds a public hospital system, a sizable Medicaid health insurance plan known as CountyCare, the of courts and one of the largest prisons in the country.

There are several competitive races in the Democratic and Republican primaries. This is in part because three incumbents — Republican Pete Silvestri of the 9th and Democrats Deborah Sims of the 5th and Larry Suffredin of the 13th — are not seeking re-election, creating vacancies for new commissioners.

Each party also hopes the election will create vacancies to expand its number of council seats in November. Silvestri is one of two Republicans on the council. The other, Sean Morrison of the 17th District, who is also chairman of the Cook County Republican Party, faces a key challenge from former Cook County Commissioner Elizabeth “Liz” Doody Gorman, who resigned in 2015.

The GOP is running candidates in just six of the 17 district primaries. But local party leaders are betting that national problems, such as record inflation and President Joe Biden’s falling approval ratings, will propel their candidates.

And despite traditional midterm losses for the White House party, local Democrats say they are not worried about maintaining — or expanding — their numbers on the council.

Silvestri has represented the 9th District in Chicago’s far northwest and northwest suburbs since 1994, but is retiring this year. He calls himself a centrist and has said he wants his successor in the politically moderate Ninth District to be a fiscal conservative who agrees that “America works when we all come together at the center.”

He has yet to endorse the race, in which three Republicans – Matt Podgorski and Frank Coconate, both of Chicago, and Mark Hosty of River Forest – are trying to replace him.

Despite the district being redesigned to be more Republican, Cook County Democrat Executive Director Jacob Kaplan questioned whether Podgorski, who has been endorsed by Morrison and other local Republicans, could be that unifying figure if he wins the nomination. of the Republican Party.

Kaplan pointed to the controversial social media presence of a political organization called the Northwest Side GOP Club, which Podgorski started in 2016. On January 7, 2021, the group shared an article on Twitter that claimed Democrats rigged the 2020 presidential election.

“They are a right-wing Republican Trump group,” Kaplan said. “These are not moderate Republicans. (Podgorski) comes from that group. I don’t think that’s the kind of Republican voters in that district would be inclined to support.”

Podgorski claimed he was not behind the organization’s social media accounts and said he accepted that Biden won the 2020 election. Still, Podgorski said Kaplan’s attack was “utterly pathetic”.

“(Democrats) are desperate because they have nothing else to talk about,” Podgorski said. “They should be talking about the Cook County gas tax, the Cook County property taxes, the sheriff’s office, Kim Foxx, things that can really affect Forest Reserves. Not on January 6th. Who cares?

Podgorski, who also owns research firm Ogden & Fry, sought to argue that another election in 2020 represents a much bigger indicator for his district and beyond: the Cook County state attorney race, where GOP candidate Patrick O’Brien lost to Foxx by 15 points, but managed to take the suburbs and outrun much of the Republican ticket.

“If (Democrats) want to hang their hats on talking about federal issues and try to tie the Republicans to (Former President Donald) Trump, good luck, because they’re going to have to wear a Kim Foxx necklace around their neck if they’re anywhere near of Cook County,” Podgorski said of the progressive prosecutor, whose term ends in 2024.

Hosty, a former Forest Park village council member, said he doesn’t believe the 2020 election was stolen from Trump. The other candidate, Coconate, is a former city official who was fired under then-Mayor Richard Daley after raising the alarm about corruption. Coconate said he believed false claims that the 2020 presidential election was rigged in Biden’s favor.

Whoever wins will face one of four Democrats in November: Sam Kukadia, who has strong union support; Maggie Trevor, endorsed by various grassroots political groups; Frank McPartlin, who ran for the seat in 2018 and narrowly lost to Silvestri; and Heather Anne Boyle, the 2020 primary candidate for the Metropolitan Water Reclamation District.

Democrats are facing their own internal power struggle between establishment heavyweights and progressives seeking government positions for the first time.

The open 5th District’s next commissioner is likely to be determined in the three-way Democratic primary, as no Republicans have run to run in the black majority district that stretches from Chicago’s South Side to the southern suburbs. Sims, who said he wants another black woman to replace her, endorsed Prairie State College administrator Monica Gordon.

Also in the running are Hazel Crest Village president Vernard Alsberry and newcomer Jaylin McClinton, who graduated last month from Chicago-Kent School of Law at the Illinois Institute of Technology.

While Gordon and Alsberry have a head start with name recognition, McClinton has tried to position himself as the reformist adversary for their opponents, who have faced ethical questions about fundraising but deny any wrongdoing.

In the Latino-majority 8th District on Chicago’s Northwest Side, incumbent Luis Arroyo Jr. faces four main opponents, including Anthony Quezada, a self-proclaimed Democratic Socialist who works for Chicago’s 35th Ward Ald. Carlos Ramirez-Rosa and has the support of progressives in the party, including US congressman Jesús “Chuy” Garcia.

Also in the running are Edwin Reyes, a former commissioner that Arroyo Jr. won in 2014; Rory McHale, former attorney at the Chicago Office of the Inspector General; and Natalie Toro, a teacher at the Chicago Public Schools. There are no Republicans at the polls in this district.

Arroyo Jr. said his strength lies in his track record of bringing resources to his district, including a new $12 million clinic in Belmont-Cragin that opened last year. But Quezada tried to classify Arroyo Jr.’s earlier work. of lobbying the state legislature while on the County Council as a “huge mistake”.

“We don’t need corporate lobbyists in elected office. We need public servants,” Quezada said. “This is not what any elected official should be doing.”

Cross-lobbying, or when a member of one government agency pressures officials from another agency, is widely allowed for Cook County employees.

“I did it for a year and I don’t do it anymore, and that’s it,” said Arroyo Jr.. “There’s nothing illegal about it. But I chose not to do it anymore because I saw where some people might have a negative opinion.”

Arroyo Jr’s father was sentenced to 57 months in prison in May after the then-state representative pleaded guilty to bribing a state senator to support gambling legislation that would have benefited a company he lobbied on behalf of the city.

Elsewhere in the county, Sean Morrison said the local Republican Party will eagerly fight to win back two northern suburban districts from their first-term Democratic commissioners who ousted Republicans, one who was then the state GOP chairman.

In the 14th District, Commissioner Scott Britton will face Republican Benton Howser in November, as neither has primary opposition.

In the 15th District, Commissioner Kevin Morrison’s GOP opponent will be either Chuck Cerniglia or Kevin Ake, the latter of whom was convicted of an anti-gay hate crime in 2002.

In the Democratic primaries for the 17th District, Lou Gale is running against Daniel Calandriello. The winner will face Sean Morrison or his primary GOP challenger Gorman in the November general election.

In the 13th District being vacated by Suffredin, the only candidate from any of the major parties who has filed to replace him is fellow Democrat Josina Morita, commissioner of the Metropolitan District for Water Recovery.

In the 11th District, former Commissioner John Daley – the son and brother of former Chicago mayors – is running unopposed in the Democratic primaries. He will face Republican Declan Smith and Libertarian Brandon Sizelove in the fall.