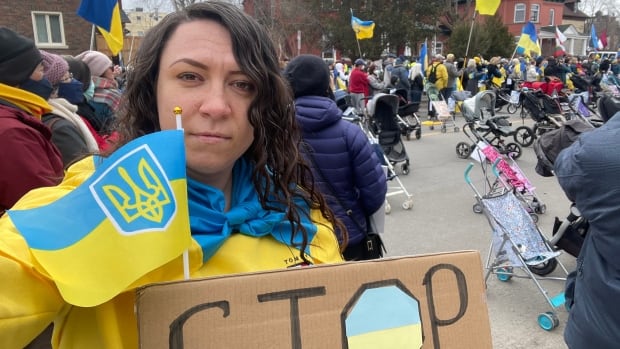 This first-person column is written by Tatiana Lebedeva who moved to Canada from Russia in 2014. For more information on CBC’s first-person stories, see the frequently asked questions.

It was late on February 23 when I read the first reports of bombings in Ukraine. A friend texted that her aunt in Kharkiv had heard explosions. I was shocked and horrified. I thought it was certainly the end of the regime built by Russian President Vladimir Putin. So many Russians have relatives and friends in Ukraine; they would certainly protest this invasion, right?

As soon as I posted a message condemning the war in VK (a Russian social media platform similar to Facebook), my uncle responded by defending the actions of the Russian military.

“You are even more brainwashed by your media than I am by mine,” his comment began.

“You think I support the war, but you are deeply mistaken. I am against it. I also stand for freedom in Ukraine, but without Nazis in your government. Your great-grandmother, my grandmother, fought in the Great Patriotic War and they exterminated the German occupiers, and you You’re defending those same fascists now. I’m ashamed of you. Too bad you don’t understand what’s going on.”

My father was dismayed to see what his brother had written. So was I.

I wanted to end the conversation there. After all, I only saw my uncle occasionally during family gatherings. The last time I saw him was at my wedding, which was also the last time I visited Russia.

That visit was in 2016. I remember turning on the TV to a Russian news and wondering how I would feel. After two years of living in Winnipeg, I was sure all I would hear was propaganda. My fears came to fruition when I saw a mundane news report about the state of the Russian economy and the decline in the quality of residential buildings that I somehow blamed the United States for.

I grimaced and turned off the TV and thought to myself, “And this is how they get you, huh.”

It is strange for me to think that in 2013 and 2014, people in Russia were able to access independent media sources like the Rain TV channel, Echo of Moscow radio and the Novaya Gazeta newspaper — all now blocked in Russia. Widespread protests against the war in Ukraine were allowed and social media was not as heavily monitored as it is today. Different opinions about events in Ukraine were available.

However, at that time, all this diversity of information was irrelevant to me because I was poisoned by propaganda.

The truth is, before I moved to Canada, the news was the only thing I liked to watch on Russian television. Every Sunday my parents and I would sit and watch weekly dress (News of the Week) with Dmitry Kiselev, who I now know is one of the main faces of the Russian propaganda machine.

When I moved to Canada in 2014, Russia had already annexed Crimea. and initiated its military actions in the Donbas region of Ukraineand I was unaware that none of it was criminal.

One day I typed “Metro News” into an internet search on my laptop. In Saint Petersburg, I always read this paper on long subway rides. Now I wondered what the Canadian version would say about Ukraine. I felt like a Russian spy.

The first article that appeared there was a word in it that I didn’t know. Troops. I Googled the translation and gasped, “Are Russian troops in Ukraine?”

This article turned my world upside down.

What if everything I knew was wrong? Because if Russia was innocent and indeed had no troops in Ukraine, then why was it being sanctioned and condemned?

It took me years to start trusting any source of information.

As a newcomer to Canada, I knew very little about Winnipeg, and everything I read in the news about the city and national politics seemed distant and irrelevant. But over time, that changed; I started to trust the local news.

Unsurprisingly, it took much longer to unlearn the propaganda I had learned about the Russian regime. It required me to confront myself, to doubt my upbringing. The worst part was acknowledging that I was wrong and accepting that it wasn’t my fault.

I started by doing online searches in English because the Russian content felt like a manipulative lie. I checked different sources and started to pay attention to how the information made me feel. Did it give me the tingling sensation of dizziness, like I was hypnotized when I watched Kiselev? Did that make me feel hypocritical? Or was it informative and neutral? I aimed for the last one.

In Canada, I have been acquiring and improving critical thinking skills that have served me well so far. Because of this, I have been protesting the Russian invasion of Ukraine.

Unfortunately, the propaganda machine in Russia has stepped up its game since my last exposure to it. By blocking or discrediting all independent media sources, monitoring social media and making it a crime to write anything that contradicts the official position of the Russian government, there is no room for doubt, critical thinking or interpretation.

Many of my friends and relatives are on an information block, so I had to try to reach my uncle again.

After a long conversation, my uncle stated that he had finished talking to me about the matter.

Do you have a compelling personal story that can bring understanding or help others? We want to hear from you. Here it is more information on how to introduce us.