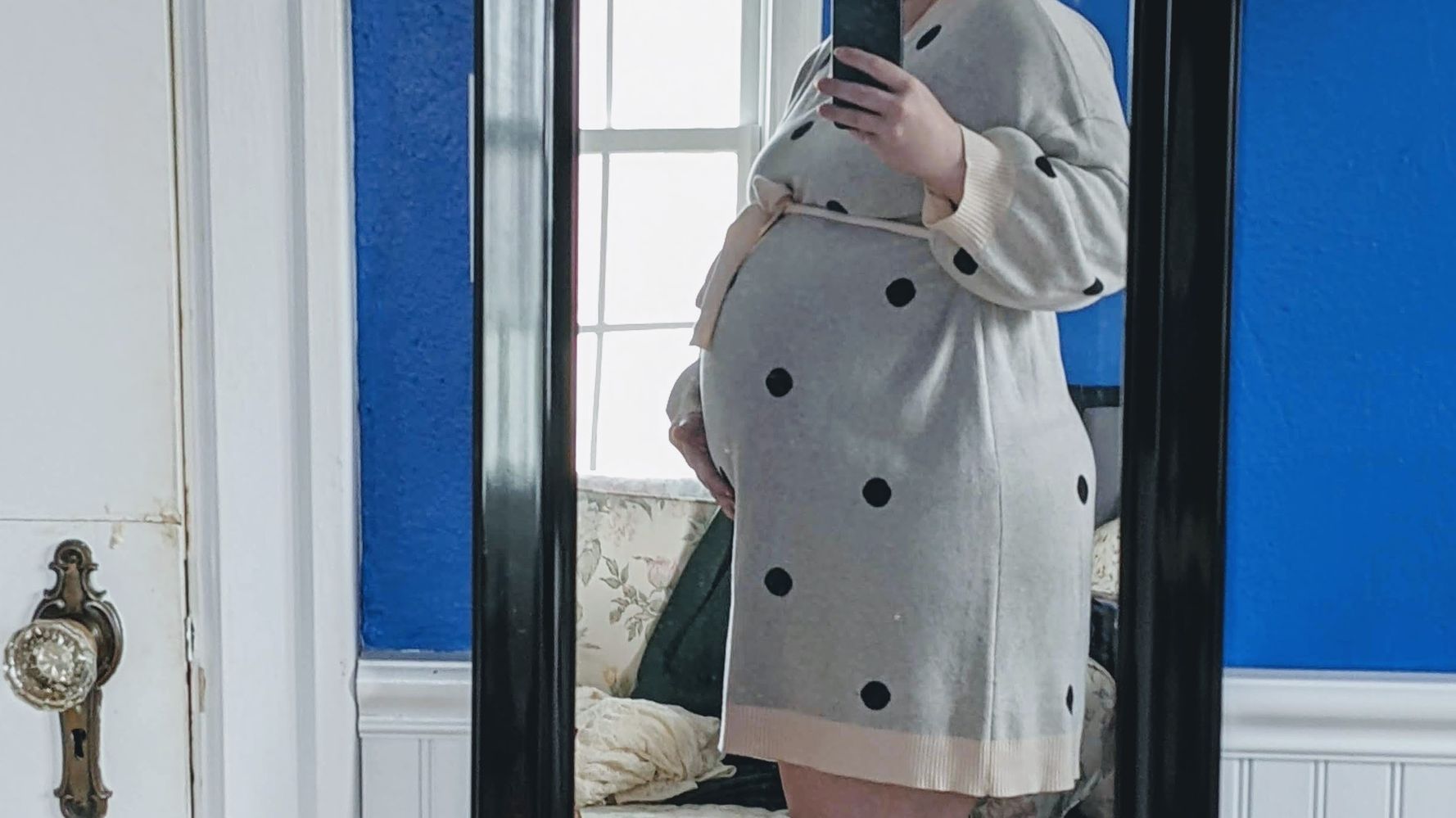 “And what does it say about me that being told I can’t have sugar makes me feel like this, like I’m losing my mind — why am I so OBSESSED with sugar? What’s WRONG WITH ME?”

Tears were creeping down my cheeks, inhales coming in broken and sniffly as I typed in the chat my husband and I used to communicate during work hours, dumping out all the intense feelings that had been pummeling me since my midwife felt the email diagnosing me with gestational diabetes.

After gastric bypass at 17 and losing 100 pounds — enough to get me into a J. Crew dress but never their pants; enough to get me attention from certain boys but never cross the societal line from “fat friend” to “cute girl” — I’d decided that, while it hadn’t made me thin, the surgery had “leveled the playing field,” meaning I could diet like a normal woman and exert some control over my previously unruly body.

I spent the next 15-plus years swinging between crash diets and hands-off-the-wheel reactive eating, punishing myself at the gym and then spending my lunch hour texting my long-distance boyfriend about what I’d eaten that day and how many calories I had left.

By the time I turned 30, though, I’d mostly accepted that my body just didn’t want to be smaller than a size 16. Dieting made me insufferably boring, so I tried to avoid it, and I’d recently discovered that yoga made me feel great, even when it didn’t make me smaller. But I was also already the smallest I’d ever been, as the result of nine months of deep depression following the end of my engagement to the aforementioned boyfriend.

When I started regaining some of that weight after meeting a new man (now my husband), my issues with food began to resurface. I scared the crap out of him with the level of my obsession, my inability to just make a change and behave normally. When I tried to be paleo for three days, making batch after batch of “cloud bread” and “cheese crisps,” he and my therapist both put their feet down. I was banned from dieting, at least without talking to my therapist first.

Things got better again. Between therapy, investing more time and energy in fat-positive spaces, and beginning to work with a nutritional counselor who specializes in intuitive eating, I was able to fight my obsession with smallness and control. Even when the pandemic weight I knew I’d gained, but hadn’t kept track of, was recorded against my will at an urgent care center and plastered in huge numbers across the top of my aftercare paperwork, I didn’t diet.

I cried, and raged, and panicked, but I didn’t diet.

The first trimester was mostly OK. Yes, finding a provider who wouldn’t obsess about my BMI was a struggle, and morning (or, for me, all-day) sickness was no joke, but with the help of my nutritional counselor I was able to let go of preconceived notions about what and how much I should be eating and focus on nourishing my body with whatever it could tolerate — pretty much just salty carbs.

But as my pregnancy advanced and the nausea eased, things only got harder. Since my gastric bypass, I’ve had to avoid particularly fatty or sweet foods; a few years later, I was diagnosed with oral allergy syndrome, which severely limited the number of fresh fruits and vegetables I can eat without cooking or pickling. I’d gotten pretty used to those restrictions, but then came pregnancy.

No raw seafood. In tuna, even if it’s fully cooked. No pink meat. No fresh/soft cheeses. In pineapple. No Caesar salads. No more than 200mg of caffeine. On Googling “Can I eat xyz during pregnancy?” unless you want to be told that thing you were about to put in your mouth might kill your unborn child.

Years of work to dismantle the binary of good versus bad foods and here was an easy loophole! I could assign moral value to foods if it pertained to my condition.

The noose only tightened when we got to the blood glucose testing stage of the pregnancy and found that, counter to the reactive hypoglycemia I’ve lived with since the gastric bypass, I was in fact teetering on the edge of gestational diabetes.

At first I was only supposed to be tracking my blood glucose and not changing my diet — I was in an “observational period” — but I knew better than to trust that. I began examining everything that went into my mouth, secretly Googling whether foods were “allowed” with gestational diabetes, and avoiding but also obsessing over carbs.

I fixated on them, at once desperate to eat nothing but bread and pastries and candy and repulsed by my own desperation, my weakness. I hunted down recipes that were diabetes-friendly but not full of fake sugar — I actually found one good one — and bought hundreds of dollars’ worth of keto substitutions for snacks I missed (word to the wise: Kodiak waffles are at the Eggos).

My last defenses had failed. After years of nutritional counseling and pushing back against diet talk at work/with my family/among friends/online, I was back to my ’90s California roots: Carbs were the enemy. And this time I couldn’t argue, because it was my baby’s health at risk, not mine.

My husband kept reminding me that this burning hot medical spotlight on my diet was temporary, but I knew something much older and more enduring had been kicked loose in my brain.

And now here I was, being explicitly told to diet, the last scraps of my sanity obliterated by an informational PDF full of condescending, shaming language around food and weight. All the time and energy (and money) I’d spent working toward a release from diet culture felt worthless in the face of this fairly common but intensely triggering diagnosis.

When I emailed my nutritional counselor about the diagnosis, she ordered me not to look at the pamphlet again and recommended that I work with a certified diabetes educator (CDE) with experience working with people in recovery from eating disorders and diet culture trauma.

And she was right. I can’t overstate the benefit of working with someone who understands the complexities of diabetes, who can view my glucose readings holistically, and who can contextualize my questions and concerns against my history and other restrictions. Every time I leave a virtual appointment with my CDE, I feel infinitely better.

But it doesn’t last. The minute it’s time to eat again, I’m thrown into turmoil. It’s actually worse than my past experiences with dieting, because the rules are less rigid: I’m supposed to eat carbs, but they have to be the right kind of carbs, in the right amounts, alongside the right balance of protein and fat and fiber. It’s enough to make me long for my fat camp days, when some skinny adult would portion everything out for me and I could just eat mindlessly (if miserably).

The constant calculations and carb-tracking and food prep are good reminders of why dieting made me so unhappy for so long. It’s exhausting and all-consuming. But I have to do it, and unfortunately my damaged brain is a little too good at it; I hate to admit that I’m settling into this joyless eating pattern, fighting the diet less every day.

Between my limited food choices and the baby squishing my stomach, I don’t feel much like eating anyway — I have to remind myself to do it, to keep us both alive. This has also caused me to steadily lose weight during the second half of my pregnancy, which my midwife seems a little too happy about for my liking (despite the dark, ancient pride that sometimes oozes up from the deepest parts of me when she mentions it ).

The good news is that most of these issues should go away within a day or two after the birth — thinking about the deli turkey sandwich I’m going to make my husband bring me in the hospital is the only thing that makes me actually look forward I’m working.

I say “should” because don’t google the statistics about type 2 diabetes after gestational diabetes. But as my CDE points out, it’s just another risk factor like any other. And thank goodness, because the last thing I need is to be obsessing over carbs and glucose readings and how much fruit I can eat when I’m trying to keep this little human alive outside my body.

What’s less certain is whether I’ll be so quick to get back to thinking of food choices as neutral or joyful, instead of as a test of my morality. I can only hope, and prepare — in case my mental health doesn’t “snap back” — to get back to the work of dismantling the lessons of diet culture that were so easy to slip back into.

Do you have a compelling personal story you’d like to see published on HuffPost? Find out what we’re looking for here and send us a pitch!

If you’re struggling with an eating disorder, call the National Eating Disorder Association hotline at 1-800-931-2237.