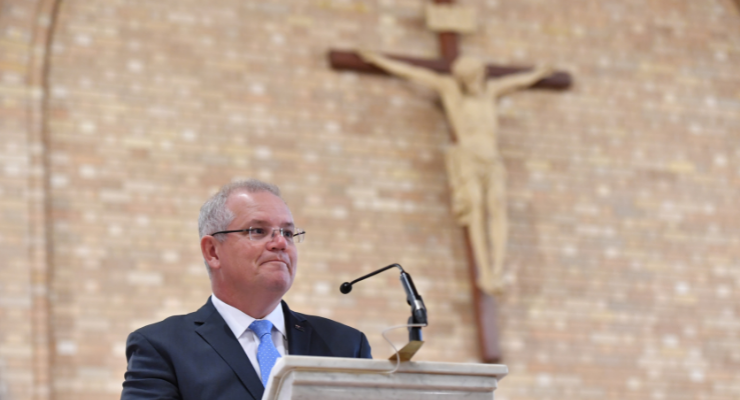 And they’re off and racing! Are we referring to the Formula One drivers in Melbourne or the pollies vying for power come election day?

Did anyone in their rush to comment on the election notice that it was called on Palm Sunday? According to the Bible, that’s when Jesus entered Jerusalem to be greeted by people waving palm branches. For Christians such as our Scott Morrison, it’s a reminder of the welcoming of Jesus into their hearts and of their willingness to follow him. Is that why ScoMo called yesterday’s election? As a message to his God-botherers who would have been eyeing the heavens, waving their hands and singing in their Hillsong-type temples that ScoMo’s second coming had arrived?

The F1 race in Melbourne yesterday attracted 677,000 viewers to Ten and 281,000 to Foxtel. Hardly worth it — very underwhelming — and yet Melbourne celebrated. Perhaps it was the good weather (we can talk in wet, old Sydney).

At insiders showed, ScoMo had to leave his taxpayer-funded, harborside accommodation in Sydney yesterday morning to travel to Canberra — again, at taxpayers’ expense. Why couldn’t it have been Zoomed? insiders still managed 582,000 national viewers — another top-10 finish on yet another Sunday.

Read more about who’s watching what on the telly…

Already a subscriber? Log in to keep reading.
Or, register your email address for a FREE 21-day trial.