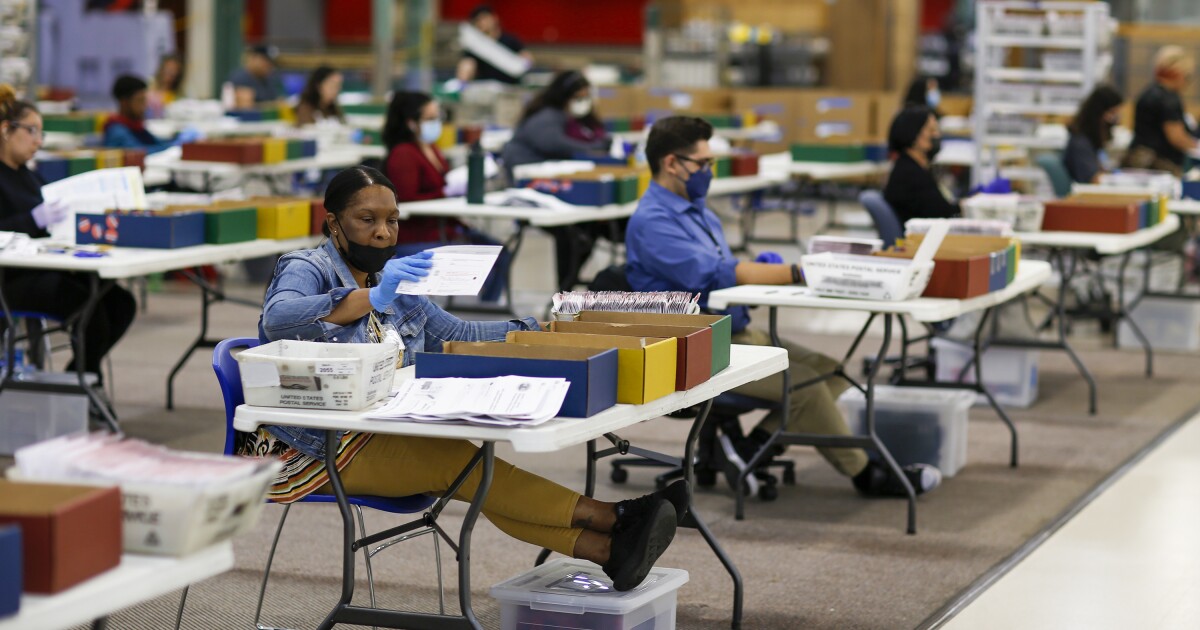 While it may seem like it’s taking a long time to count the Los Angeles County primary ballots 10 days ago, officials say the process is moving ahead on schedule, with a final count likely on July 1.

So far, more than 1.2 million ballots have been counted and publicly released across the county, with another vote total update scheduled for Friday.

Officials say 80% of the ballots counted so far have been mailed or dropped off at polling centers or drop-off boxes – many of them in the final days of the voting period that ended on June 7.

This created a huge post-election backlog for workers processing the ballots.

“Campaigns and candidates, news outlets — they want their results now,” Michael Sanchez, public information officer for the Los Angeles County Registrar-Recorder, said Thursday. “The reality is that we have to check every ballot. We have to process all the ballots before we sort them, and that takes time and resources.”

What’s different about this election?

A state law passed last year requires ballots to be mailed to all voters for state elections in June and November. The law also applies to local elections. (Voters also received ballots in the 2020 election and the 2021 election targeting Governor Gavin Newsom.)

In this election, many voters in Los Angeles County used mail-in ballots and waited to mail or deliver them.

When all votes are counted, officials expect the total number of votes by mail to exceed the current 80%.

Other statewide changes in recent years have sought to make life easier for voters. Voters have seven days to return ballots posted on Election Day, instead of the three days they previously had.

“With laws that were written to be more inclusive, allowing more voters to participate, and extending deadlines for mail-in ballots, the process takes longer to count,” said Douglas Herman, campaign strategist for Rep. Karen Bass on Thursday. “That’s not a bad thing, it’s just democracy in action.”

Why can’t votes be counted faster?

Mail-in ballots are sorted in a large building in the City of Industry. The building, which used to house a Fry electronics store, resembles a warehouse. Hundreds of employees and temporary workers sit at tables under bright lights.

Workers use a scanner to check the signatures on the back of the envelopes and make sure they match the signature on the voter registration or driver’s license.

If there is no match, the team manually compares the signatures.

After that, workers study the banknotes to ensure they are not smudged or multi-marked.

After the notes are processed, they are placed in a box and shipped to a facility in Downey. They are counted electronically twice a week and the results are publicly reported.

For security reasons, the counting machines are not connected to an external network.

Sanchez said it is not taking longer to count votes in this election, despite the number of mail-in ballots. The municipality is adequately equipped to process and count votes, he said.

The county plans to certify the results by July 1. But many of the ballots will be counted until Tuesday, he said. By law, results must be certified within 30 days of the election.

Was there anything different with the election?

Political consultants have pointed out that postal ballots have traditionally been made by older, more conservative voters. These voters tend to vote early in an election.

But it is now clear that many voters, including progressives, are also using mail-in ballots.

David Benning, president of the San Fernando Valley Republican Club, said he is a longtime mail-in voter. He said a “surprising number” of his club members historically voted in person.