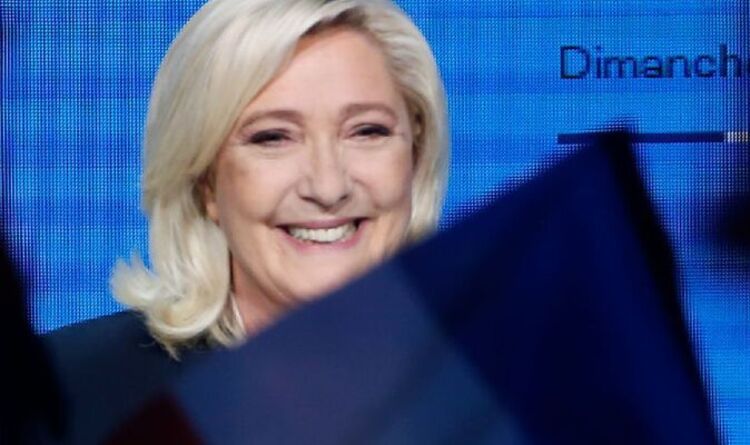 President Emmanuel Macron will not be able to count on French voters’ traditional anti-far right in the final runoff and will need to step up his campaign if he is to defeat Marine Le Pen, who has successfully softened her image.

Although Macron was projected to win a better-than-expected first round score of 28 percent, improving on his 2017 result, Macron cannot count on victory: polls forecast a razor-thin margin of victory against Le Pen in the April 24 run-off .

In past elections at national, regional and municipal levels, left- and right-wing voters have historically united to block the far right from power, a phenomenon known as a ‘republicain front’.

While all mainstream candidates, including those of the conservative Les Republicains and Socialist party, endorsed Mr Macron for the runoff on Sunday night, it is not clear their voters will follow. Moreover, their low single-digit scores were so pitiful that their support may carry little weight.

Another Iop survey in March showed that fewer than half of all French now found her “scary”.

In her speech on Sunday, she painted herself as a unifying figure, who would heal France’s “fractures” and halt the “chaos” supposedly brought about by Macron, a former banker who she said embodied the “power of money” and worked for the few.

Presidential candidate Nicolas Dupont-Aignan who received 2.1 percent of the votes in the first round, urged his supporters to vote for Ms Le Pen on Sunday.

He tweeted: “‘Let’s be firm, pure and faithful; at the end of our labours, there is the greatest glory in the world, that of the men who did not give in’, De Gaulle.

“I call on the French people to do everything to block Macron.

“This is why I will vote for Marine Le Pen.”

Far-right candidate Éric Zemmour who received 7.1 percent of the votes in the first round, also urged voters to support Marine Le Pen.

He said: “I am determined to continue the fight and I will not choose the wrong opponent.

“That is why I am calling to vote for Marine Le Pen.

“There is something much bigger than us: France.”

Echoing their comments, Generation Frexit leader Charles-Henri Gallois also said: “For Generation Frexit, there will be no ambiguity! Do whatever you want, but vote against Macron. ANYTHING BUT MACRON!”

The French President took his hunt for more re-election support on Monday to France’s former industrial heartland in the north, a blue-collar stronghold of Ms Le Pen.

Mr Macron headed to the northern town of Denain, which once prided itself as the mining and steel capital of France but where in 2019 almost half the population lived in poverty and one in three people of active age were unemployed in 2018.

Ms Le Pen on Sunday won 42 percent of votes in the town.

As results filtered out, Mr Macron took aim at his far-right rival over the financing of her economic agenda, which would see the retirement age cut to 60 for those who start work before 20, income tax scrapped for the under-30s and VAT on energy reduced to 5.5 percent from 20 percent.

Ms Le Pen has brought the image of her far-right party closer to the mainstream at a time when France has also lurched to the right in the wake of Islamist attacks. Even so, her softer, less combative manner her belies a hardline anti-immigrant programme.

But it has been her focus on the cost-of-living issues troubling millions and her ability to connect with common folk that has proved particularly popular.

Ms Le Pen said voters were making a choice between two opposite visions of France: “one of division, injustice and disorder by Emmanuel Macron for the benefit of a few, the other a rallying together of French people around social justice and protection.”

President Macron supporters and some of his campaign insiders have said he must do more to win over the left.

Finance Minister Bruno Le Maire said themes often associated with the political left, such as the fight against climate change and the strengthening of the European Union, would play a key role in the next two weeks of campaigning.