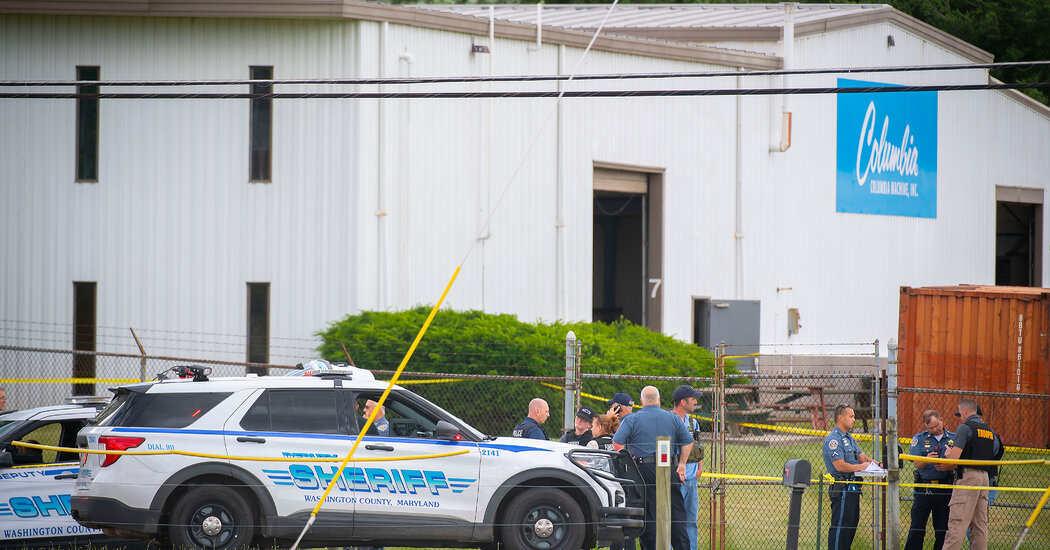 An employee opened fire at a factory in Maryland on Thursday afternoon, killing three co-workers and seriously injuring another before he was shot by a state trooper in an exchange of gunfire that left both men injured, officials said.

Officers from the Washington County Sheriff’s Office arrived at the facility near Smithsburg, Maryland, about 110 kilometers northwest of Baltimore, in response to reports of an active shooter around 2:30 pm, but the man had already fled, the office said. from the sheriff.

Officers found three people dead and one person in critical condition at Columbia Machine, a company based in Vancouver, Washington, the sheriff’s office said. Company officials did not immediately respond to phone calls and emails.

The injured police officer was treated at a hospital and released, while the suspect’s condition was not immediately reported.

The motive for the shooting was not immediately clear.

The suspect was identified as a 23-year-old from West Virginia, but authorities did not release his name because he had not been charged, said Sheriff Douglas W. Mullendore of the Washington County Sheriff’s Office.

Mayor Donald L. Souders described Smithsburg as a small town of about 3,000 people about 40 kilometers south of Gettysburg and north of Antietam.

“We are a city that has seen tragedies before,” Souders said. “And we got together. And we will do the same thing and we will be there for the victims, their families, the survivors and for the officer who was injured today.”

The sheriff’s office said federal agencies, including the Federal Bureau of Investigation and the Bureau of Alcohol, Tobacco, Firearms and Explosives, were assisting in the investigation.

Columbia Machine is a privately held company founded in 1937 that designs, manufactures and supports “factory automation equipment solutions for a variety of industries” and does business in more than 100 countries, the company said in a press release from 2019

The shooting followed a string of recent high-profile mass murders, including one in Uvalde, Texas, and Buffalo, NY.

Senator Chris Van Hollen of Maryland said in a statement Thursday night that he was “devastated” by the shooting.

“Today’s horrific shooting comes as our state and nation has witnessed tragedy after tragedy, and it has to stop,” he said. “We must act to address the mass shootings and the daily number of gun violence in our communities.”