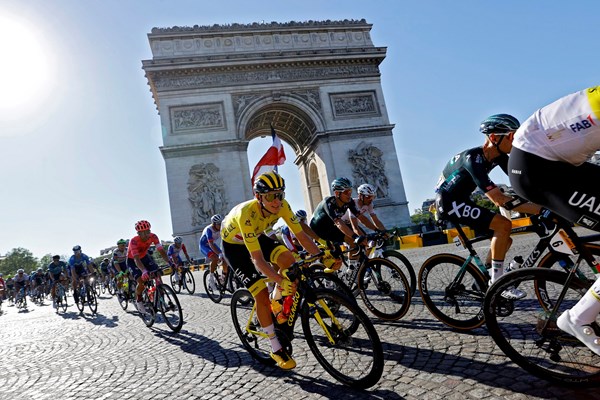 Next Friday, the Tour de France, the most famous cycling event in the world, which the Emirates team seeks to dominate again and win its title for the third time in a row, in an achievement that will be different in the event that enters its 109th year. edition and brings together the best and most prominent riders in the world to participate in 21 stages included in the tour. Starting with a race against time on a 13.2km track, riders head into the mountains to test their skills and abilities to their limits.
One of the most prominent pilots taking part in the tour is Tadi Bogachar, the star of the Emirates team. The Slovenian is looking forward to his third consecutive Tour de France victory, which will allow him to join an exclusive club of the world’s most famous cyclists who have trained before him, including Jacques Ankitel, Eddie Merckx, Miguel Induran and Chris Froome.
In his quest to enter cycling history from its widest doors, Tade will have the support of his UAE teammates, who ended their incredible participation in the Tour of Slovenia by winning 4 of its five stages, which excites them. and motivates them forward to the start of the Tour de France.
The Tour de France is one of the most challenging cycling races in the world, testing the strength of cyclists on various windswept tracks as well as cobblestone tracks, sprints, distance climbs and time trials. The tour is also famous for the great climbing distances and hard slopes in the Alps region where cyclists will head to at the beginning of the second week.
For his part, Tadi Bogachar said: “All of us on the team are ready for the tour. We have a strong and close team and we are very confident in our abilities. Our preparation was perfect and I feel fit and capable and I can’t wait to start the Tour.
Mauro Gianetti, CEO of Team Emirates, said: When Team Emirates was formed in 2017, we developed an ambitious five-year plan with the aim of winning the Tour de France, to establish the team’s position as one of the best teams participating in the Around the World. Today, we are proud to have won the Tour de France twice in a row and we are ready to defend the title and achieve our third victory. All of us at the team are proud of our impressive achievements in such a short period, and all this would not have been possible without the generous support we have received from the UAE, so we are determined to delight the hearts of the team’s fans in the UAE. United.