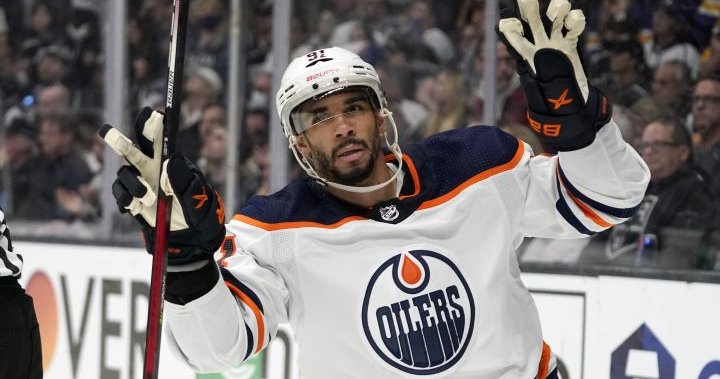 The Edmonton Oilers won 4-2 over the Kings on Thursday night in Los Angeles to force a Game 7 Saturday night at Rogers Place.

“We felt like we did a lot of really good things and we just went with it,” Oilers coach Jay Woodcroft said after the game. “We were persistent; he kept hammering the rock and eventually it broke.”

The Oilers took the lead at 1:40 of the competition. Captain Connor McDavid came down the left side, dove behind the net and defeated Kings goalkeeper Jonathan Quick with a wraparound.

The Oilers killed two LA power plays in the first and had a 15-12 lead on shots on goal.

Kane thought he had scored again a few minutes later, but the goal was disallowed when the referee ruled Edmonton forward Zach Hyman interfered with Quick before the shot.

Los Angeles defender Sean Durzi scored on a power play to reduce the Oilers’ lead to 2-1.

The Kings equalized 29 seconds into the third half when Carl Grundstrom fired at goalie Mike Smith’s blocker.

“I was lucky to beat Quickie there, he’s been playing really well so far,” said Barrie. “So it was kind of cool to see that one come in.”

Kailer Yamamoto was caught tripping with 3:37 left. The Oilers killed with some sharp saves from Smith.

Kane scored on an empty net to close.

Smith made 30 saves. McDavid and Kane had three points.

“We’re off to a good start, finally, on this series,” Kane said. “I thought it was great for us. We knew they were going to push. Obviously the third period didn’t start the way we wanted it to, but I think this group showed that all year – keeping it up and not getting discouraged. We knew we could get one, we just needed to make sure it was the next one. So we did a great job and brought it back home for seven. ”

You can listen to live coverage of Saturday’s game at 630 CHED starting with the show of confrontation at 18:00 The real game starts at 20:00

1:55
Edmonton Oilers have fans all over the world watching the final playoff race