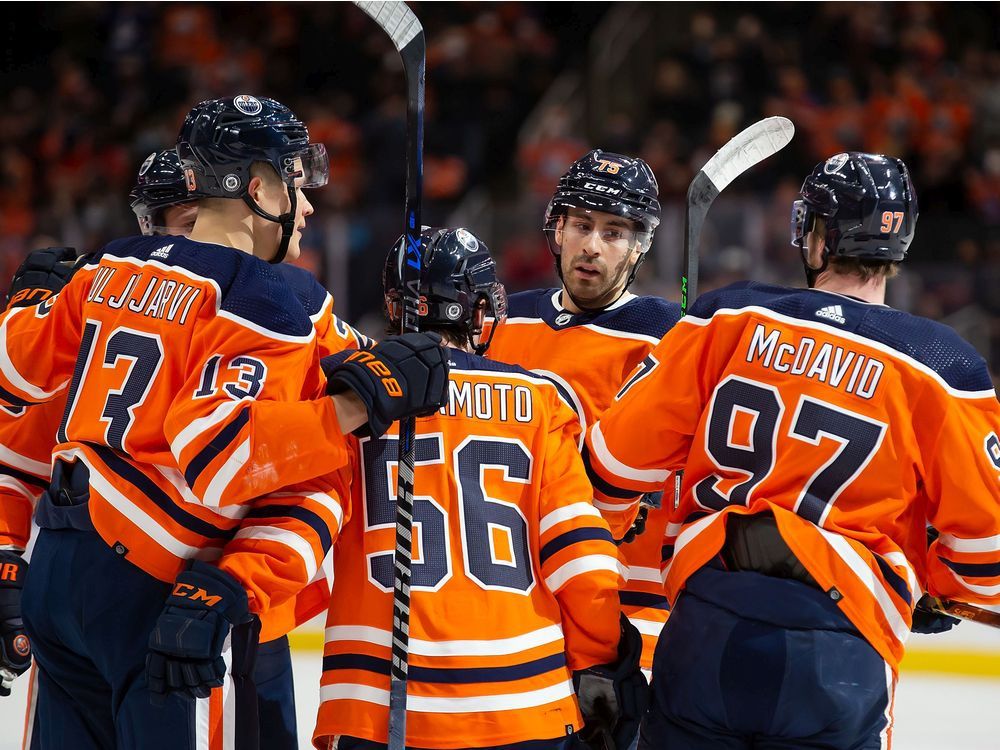 We don’t know the hockey destiny of Evan Bouchard, the 22-year-old defenseman of the Edmonton Oilers. We’ve seen too many young hot shot attackers on the blueline flame out to be certain of stardom, correct?

But that doesn’t mean Bouchard’s 2021-22 season can’t be heralded for what it is, an outstanding offensive campaign at even strength, one that gives hope that the Oil have found their prime puck-mover and offensive general from the backend for the next decade. 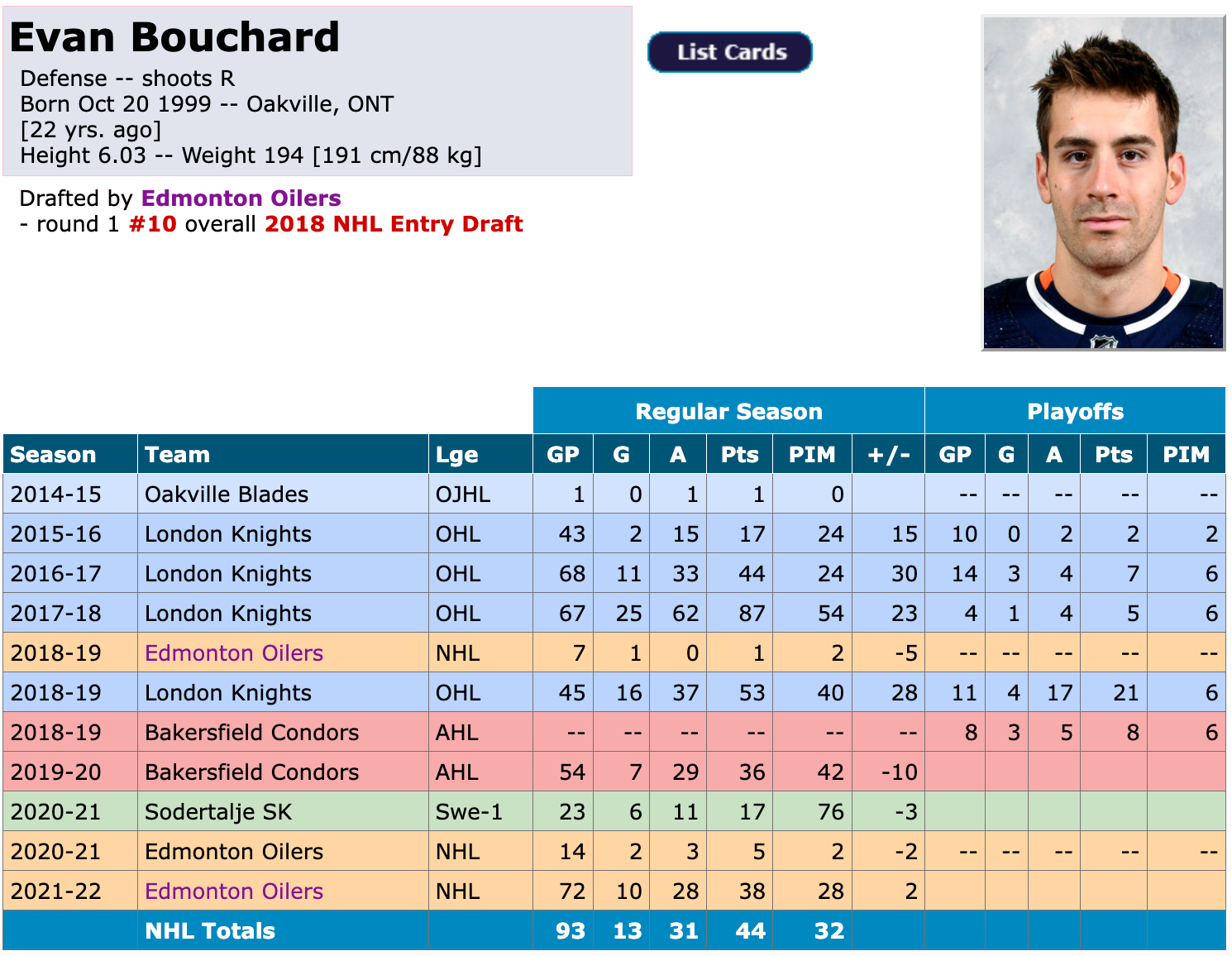 He’s still getting used to his teammates and the NHL, and his teammates are still figuring out how to make the most of Bouchard’s particular skills, but the calm, poised and highly skilled and co-ordinated shooter and passer of the puck has already established himself as a serious offensive threat at even strength.

He’s got 31 even strength points, fourth on the Oilers behind on Connor McDavid, Leon Draisaitl and Zach Hyman, and more than any other d-men, including Darnell Nurse, 25, Cody Ceci, 23, Duncan Keith, 17, and power play quarterback Tyson Barrie, 16.

But Bouchard isn’t just a standout on his own team. It compares well to the rest of the NHL in a number of key offensive categories at even strength.

In his point scoring, he’s well ahead of teammates Ceci, Nurse, Keith and Barrie. He’s in a group around 1.5 points per 60 with Erik Karlsson, Morgan Rielly, Justin Faulk, Adam Fox and MacKenzie Weeger. Those are pretty big names, but Evan Bouchard is one of them.

Not only that his rate of even strength scoring this year is ahead of the other top d-men taken in the 2018 draft: Bouchard 1.55 per 60; Rasmus Dahlin, 1.12, Adam Boqvist, 1.25, Quinn Hughes, 1.05, Noah Dobson, 1.17. It’s just one season — and point scoring totals shoot up and down — but just like Bouchard was a cut above putting up points in major junior, he’s now doing it in the NHL. It’s safe to say if there were a redraft of 2018, Bouchard would go four or five spots higher than 10th overall, with only Andrei Svechnikov, Hughes and Brady Tkachuk clearly ahead of him.

He doesn’t do it with blazing speed or uncommon agility. His main weapon is his shot, the explosive Bouch Bomb, and his passing, which he carries out with pin point accuracy.

But he’s a high-event player.

So far, as much as he brings on the attack he can give up in his own end. No Oilers d-man is more likely to make a major mistake on a Grade A shot against, with Bouch’s troubles often coming in the corners and in front of the net in his own zone where he will both lose battles and also get out of position. I can tell you this with some certainty because we do the video analysis at the Cult of Hockey, going over every Grade A shot for and against, trying to ascertain against which players made mistakes on shots and which players made major contributions on Grade A shots for.

But he’s learning here as well, trending in the right direction, slowly cutting down on his number of mistakes. He’s adding a wee bit of stick, snarl and slash to his game, possibly due to the influence of new coach Dave Manson. He’ll never be a Big Bobby Clobber like Manson himself was, but that’s not the goal. He’s merely got to be sound, to forcefully and consistently stay on the right side of his check in the defensive zone, while also winning more than a fair share of puck battles.

When you average out the two, Bouchard has done as well as almost any other Oilers d-man this year, though their numbers get a significant bump because he’s faced far less difficult opponents than players like Ceci and Nurse. It’s easier to score on third and fourth liners and easier to defend against them. 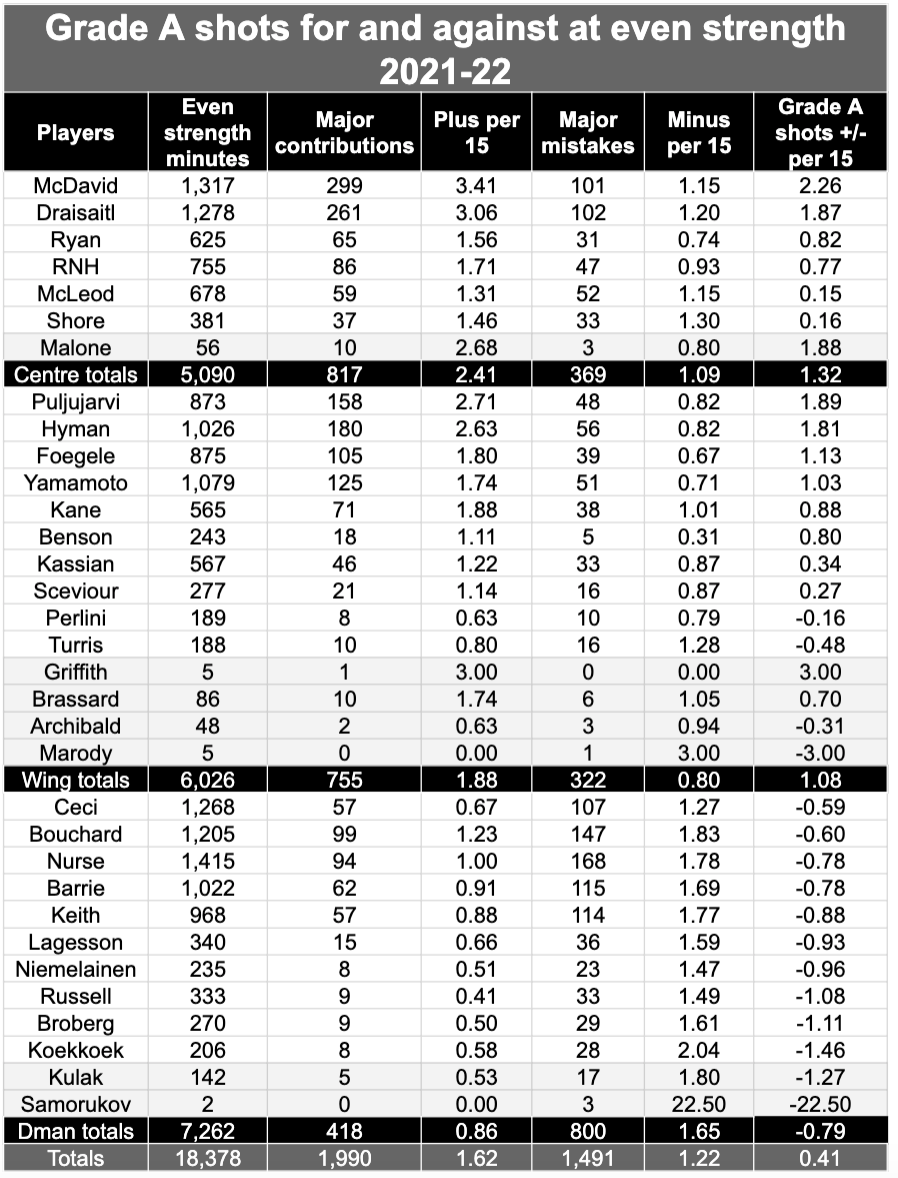 Bouchard’s play has trended up since he’s been partnered with veteran Duncan Keith. Neither player is a top shutdown d-man at this point, with most of the heavy lifting against the toughest competition done by The Indispensables, the new pairing of Darnell Nurse and Cody Ceci which is constantly asked to play against the very best attackers of the NHL. The Oilers would sink fast without Nurse and Ceci as the spine of their defence, even as the partnership isn’t perfect. But they’re good enough.

Bouchard and Keith are also good enough. They’re both super sharp with the puck, and they’re also hanging in on defense, both of them cutting down on their number of major mistakes after some rocky patches earlier this season.

What do the Oilers need from this pairing in weeks to come? More of the same on the attack, combined with increased focus and intensity on defence, making sure they’re getting the job done there. It’s a similar recipe as you’ll find with so many players on this team, who are brilliant on the attack but not always so shinny when it comes to defensive chores. But so far, so good with Bouchard.

He’s passing the test of his first full season in the NHL, and showing glimmers of an offensive game that should drive Edmonton forward for years to come.

No easy answers around the Jason Kenney leadership conundrum

Sign up to receive daily headline news from the Edmonton Journal, a division of Postmedia Network Inc.

The next issue of Edmonton Journal Headline News will soon be in your inbox.