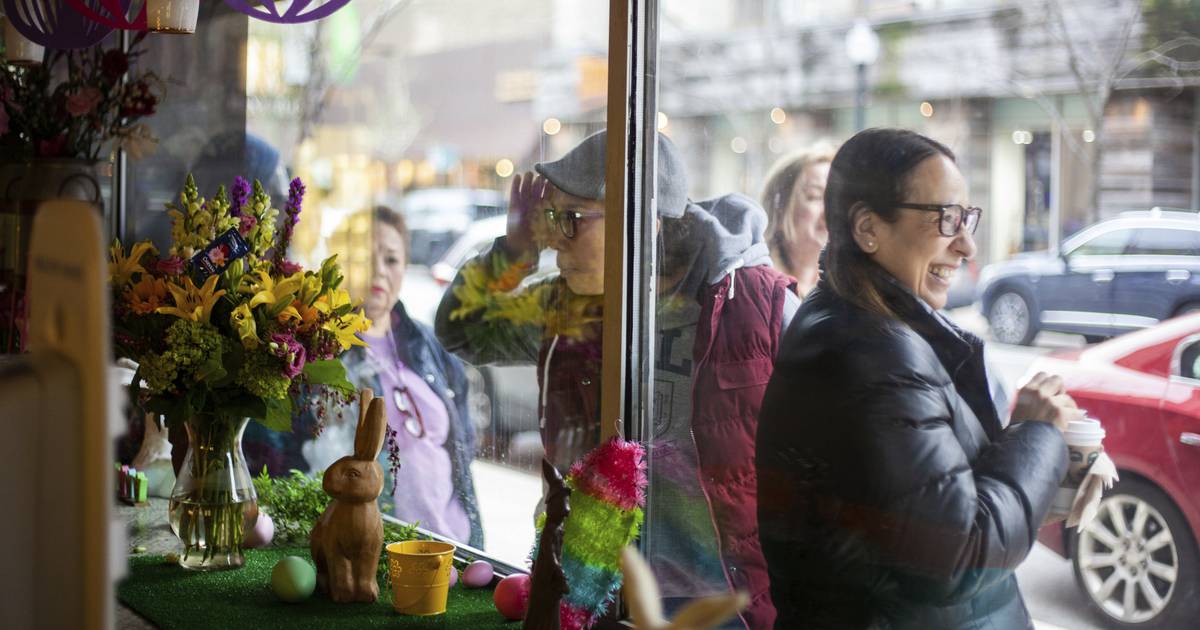 Dinkel’s Bakery, open since 1922 and owned by three generations of the Dinkel family, who have made countless cakes to celebrate and mourn over the decades, will permanently close at 5 pm Saturday in Chicago.

“I was here around 4:30 am,” said Nicole Udrow, the first person in a line of 50 or so an hour before doors opened at 7 am. orders for the entire family from Dixon, Illinois, to the Wisconsin border.”

She was hoping to get some homemade cakes.

“This is the famous buttercream cake with a chocolate or vanilla filling,” said Udrow. “Every birthday, that’s what we have. We didn’t expect the gifts; We were looking forward to Dinkel’s cake.”

Many customers have been coming to the Lakeview neighborhood bakery over the past few weeks for the ultimate Dinkel’s cakes.

“Yesterday there was a 65th wedding anniversary,” said Luke Karl, general manager. “They’ve been buying their cakes here for the entire wedding, and probably before that, they were saying.”

Karl started working at the bakery in 2008. He joined his last shift at 4 am.

“Today is going to be a blast,” Karl said. “We are trying to make as many Danish and coffee cakes, cakes and donuts as we can.”

At one point, he was supposed to take over the bakery from owner Norm Dinkel, his former father-in-law.

“There’s always a chance,” Karl said. “He and I have a wonderful relationship.”

Dinkel sold the property at 3329 N. Lincoln Ave. on April 5th. He announced the closing of the bakery the same day. Dinkel maintains the business and all of the family’s recipes, including his bestselling Stollen, a golden mosaic of fruit bread.

Three bakers were the first to arrive at 2am last morning.

“We have kolaches,” Sergio Hernandez said, releasing a warm blast of buttery sweet aromas as he pulled trays out of a walk-in oven. “We made three different flavors: raspberry, cheese and apricot. We still have some coffee cakes with fruit in the oven.”

Hernandez, originally from Mexico City, has been cooking for 20 years and started working at Dinkel’s about eight years ago.

“There are some things that are my favorites, and I’m going to take them to the family,” he said. “Kolaches, stollen and some donuts too – my kids love them.”

He’s trying to find another place to work.

“Those years were some of my favorite years,” Hernandez said. “I learned a lot in this place. I had good co-workers. And Mr. Dinkel and Luke, they’re really nice people.

“I have a three-month contract,” he said. April was the last month of business for the bakery, with the last lamb buns decorated and packed for Easter. “In May, we will auction the equipment. And then in June, we’re going to clean it up the way new people want it.”

The sale did not include the bakery’s iconic neon sign.

“I was going to take it down,” Dinkel said, “only to find that there is some significant value to collectors. Then I will auction it off.”

Donley Auctions in Union, Illinois will begin taking bids around the third week of May. The income will be donated equally between the Little Sisters of the Poor and Misericórdia.

“That way, I will take care of the young and the old,” Dinkel said. “And I think it’s a good way out.”

His son, Eric Dinkel, flew in from Denver, Colorado, to help out on the last day.

“I grew up working here,” he said. “And I worked here for several years in my 20s, then I decided to be a teacher.”

He teaches science in high school.

“The elephant in the room question is, why am I not taking over?” said Eric Dinkel. “I took a chance, and I love it, but it’s not my thing. I went into my mother’s business. She was a teacher, so I entered that world. It is exactly where I resonate in this life.”

He’s been reminding his dad that there’s something good in deciding what to do with your life, not deciding for you.

“He worked hard,” said Eric Dinkel. “It’s time for him to retire and start a new chapter.”

This new chapter includes writing a book on the history of the bakery, with recipes for professional and home bakers, possibly released for Christmas.

It’s the end of an epic era of love and loss for an immigrant family that spanned over a century.

“My grandfather, Joseph Dinkel, came from Germany around 1905,” said Norm Dinkel. “How did he end up in Chicago? I don’t know. But he came as a certified master baker.”

Joseph Dinkel got a job at the Schulze & Burch Biscuit Company on the South Side and worked there for several years.

“Meanwhile, his wife, my grandmother, Antonie Dinkel, came on her own,” Dinkel said. “Because history said that if she didn’t like the United States, she would go back to Germany. She didn’t want to be forced to pay for her ticket. She was a very independent woman.”

German bakery owners who came home to visit were away for months because of the time it took to travel.

“My grandfather would come and run his bakeries for them,” he said. “And in every case when the bakery boss came back – as they called the bakery owners at the time – the bakery was working much better. Much better product and they are making a lot more money. So my grandfather said, ‘I think we can do this.’

In 1922, the couple took over a bakery and renamed it Dinkel’s. It was across the street from where their business would continue for 100 years. He baked and she sold.

“At 26, they moved across the street,” Norm Dinkel said. “People said, ‘You’ll never succeed if you move to the east side of Lincoln Avenue, because people don’t like to shop when the sun is on that side of the street.’ This was long before air conditioning existed. My grandfather said if they want good baked goods, they’re going to have to cross the street.”

But the Great Depression arrived in 1929.

“My grandfather borrowed a lot of money from Lakeview Bank,” Dinkel said. “So he went to see the bank staff. Unlike today, they said, ‘Hey Joe, we don’t want to be in the bakery business. We are in the banking business. So you pay us what you can, and we’ll work this out together. And he did. That’s how the bakery got through the Depression.”

At that time, the bakery was open on a Saturday night.

“A man robbed came in and shot my grandfather in the back,” Dinkel said. “My grandfather survived the gunshot wound but lost interest in the business.”

“I think if you get shot in your own business, you might get a little hesitant.”

“My dad was going to the University of Illinois at Champaign,” Dinkel said. “He wanted to be a lawyer. He didn’t want to be part of the bakery business.”

His father, Norman Dinkel Sr., dropped out of college and ended up taking over the bakery.

Norman Dinkel Jr. was born at Ravenswood Hospital on April 11, 1944.

In 1946, they built the existing store, and the neon sign went up.

He went to elementary school at the Queen of All Saints; high school at Northwestern Military and Naval Academy in Lake Geneva, Wisconsin; then Lake Forest College. He fulfilled his father’s original plan to become a lawyer.

“I went to Loyola Law School, class of 69,” Dinkel said. “And then I practiced law for a few years.

He worked for the Securities and Exchange Commission in Chicago as an enforcement attorney.

“Family businesses are not easy,” Dinkel said. “I used to have terrible disagreements with my late father. If he were alive today, I would apologize profusely.”

In 1972, Norman Dinkel Sr. told his son to get into the bakery business or he would sell it.

“I talked to some senior partners at law firms,” said Norman Dinkel Jr.. “I asked them, ‘If you could lead your life over again, would you like to practice law or have a business?’ And all those lawyers who had their own law firms said, ‘Actually, I think I’d rather have my own business.’ That’s how I made the decision to go into the bakery business.”

He and his late wife, Holly Dinkel, raised two daughters and a son at the bakery. There are now five grandchildren in the family.

“I’ve been doing this for 50 years,” Dinkel said. “I was covering cakes last week and as much as I think I can still freeze 100 cakes easily, the parts don’t work like they used to.”

He had help from about two dozen employees.

“The succession plan was that my daughter would be the ideal person,” Dinkel said. “And Luke, my ex-son-in-law, would be the implementer of those ideas.”

Unfortunately, they divorced and she moved from Chicago.

“He has the best cooking instincts ever and a wonderful attitude,” Dinkel said. “I’m sorry this is happening. It would have been a lot easier to keep the business going, and I walked away from it.”

“I’m thrilled with all the customers and all their memories,” Dinkel said, his voice breaking. “All the family events our little bakery became a part of. It’s just overwhelming.”

What to eat. What to watch. What you need to live your best life… right now.

On his 79th birthday on April 11, he hasn’t celebrated with any of the cakes he and his family have been making for 100 years.

“No one was here,” he said. “I had dinner alone at my house very late because the bakery is in chaos.”

“Everyone in the family is flying into closure,” Dinkel said. “We’re having a little family party tonight. And we will have white rose cake, brownie pie and black forest cake.”

What is white rose cake?

“It’s a combination of chocolate and vanilla cakes, white chocolate mousse, vanilla buttercream with chocolate ganache on top and a rose buttercream on top,” he helps. “This is one of my favorite cakes.”

Big screen or home broadcast, takeout or dinner, Tribune writers are here to guide you toward your next great experience. Sign up for your free weekly eat. To see. Do. Newsletter on here.