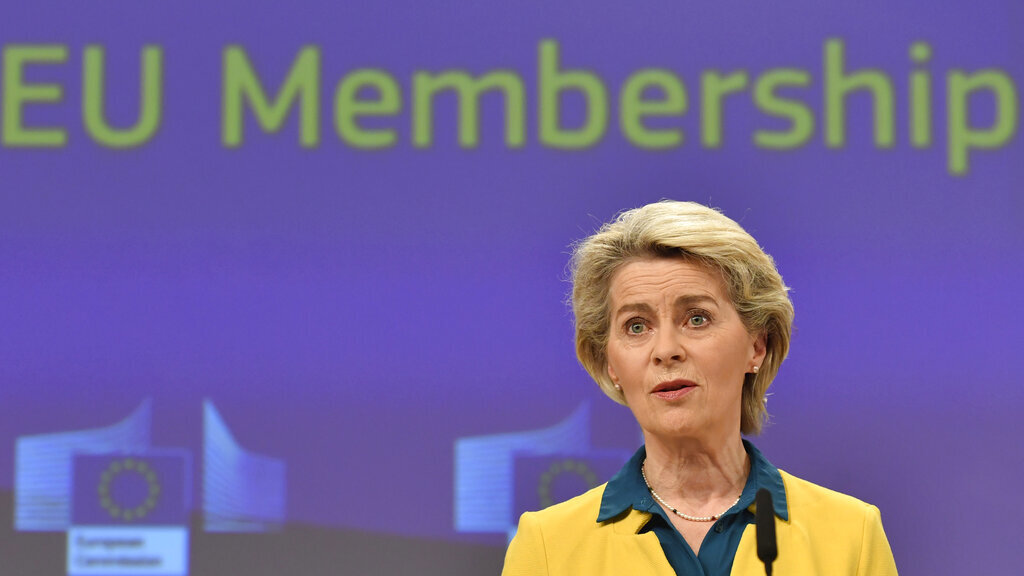 European Commission President Ursula von der Leyen speaks during a press conference following a meeting of the College of Commissioners at EU Headquarters in Brussels on Friday.

European Commission President Ursula von der Leyen speaks during a press conference following a meeting of the College of Commissioners at EU Headquarters in Brussels on Friday.

BRUSSELS – The European Union’s executive arm on Friday recommended making Ukraine a candidate for EU membership, a first step in what was expected to be a long road for the war-torn country to join the 27-nation bloc.

The European Commission presented its proposal to grant Ukraine candidate status after a quick analysis of responses to a questionnaire. The Ukrainian government applied for EU membership less than a week after Russia invaded the country.

“Ukrainians are ready to die for the European perspective,” said commission chair Ursula von der Leyen. “We want them to live with us, the European dream.”

Leaders of the bloc’s existing members are expected to discuss the recommendation during a summit next week in Brussels. The European Commission’s endorsement, while a strong sign of solidarity with Ukraine, will likely take years or even decades to materialize in EU membership.

Adding new members requires unanimous approval from all existing EU member countries. They expressed differing opinions on how quickly to add Ukraine to their ranks. Ukraine’s bid received a boost when the leaders of France, Germany, Italy and Romania visited the country on Thursday and pledged to support its bid.

To be admitted, potential newcomers need to demonstrate that they meet EU standards regarding democratic principles and must absorb around 80,000 pages of rules covering everything from trade and immigration to fertilizer and the rule of law.

Before Russia’s war in Ukraine, the European Commission has repeatedly expressed concern in recent years about corruption in Ukraine and the need for profound political and economic reforms.

“Yes, Ukraine deserves a European perspective. It should be hailed as a candidate country, on the understanding that important work still needs to be done,” von der Leyen said on Friday. “The whole process is based on merit. It follows the book and therefore progress is entirely up to Ukraine.”

Ukraine currently has an association agreement with the EU, which aims to open up Ukraine’s markets and bring it closer to Europe. It includes a far-reaching free trade pact. Von der Leyen said that due to the 2016 agreement, “Ukraine has already implemented around 70% of EU rules, norms and standards”.

“It is participating in many important EU programs,” she continued. “Ukraine is a robust parliamentary democracy. It has a well-functioning public administration that has kept the country going even through this war.”

Von der Leyen said the country must continue to make progress in the areas of rule of law and the fight against corruption. She also cited the need to speed up the selection of higher court judges.

Streamlining Ukraine’s candidacy by declaring it an official candidate would defy the normal EU manual for adding members. The degree to which Ukraine’s accelerated membership application represents a change from the EU’s standard operating procedure is evident from the experiences of other would-be members.

Turkey, for example, applied for membership in 1987, was granted candidate status in 1999, and had to wait until 2005 to begin negotiations for effective entry. Six of the so-called Western Balkan countries – Serbia, Montenegro, North Macedonia, Albania, Bosnia and Kosovo – have been on the EU’s waiting list for decades, and only Serbia and Montenegro have proposed candidate status for Ukraine.

At their June 23 summit, EU heads of state and government therefore face a delicate balancing act: signaling to Ukraine that the door is ajar while reassuring other would-be members and some EU citizens that there is no are showing favoritism to Kyiv.

Ukrainian President Volodymyr Zelenskyy said on Friday he was grateful for the European Commission’s recommendation to put his country and Moldova on the path to membership. He called it “the first step on the road to EU membership that will certainly bring our victory closer.”

Zelenskyy added that he “expected a positive outcome” from the EU summit in Brussels.

Earlier on Friday, Zelenskyy said it was in the interests of all of Europe to see Moscow defeated in their country.

Speaking at an annual discussion forum in North Macedonia, Zelenskyy said Russian actions even before the war “challenged every nation on the continent, every region of Europe”.

“Today, there is not a single country in Europe that has not experienced at least one of the many manifestations of Russian anti-European policies,” he said.