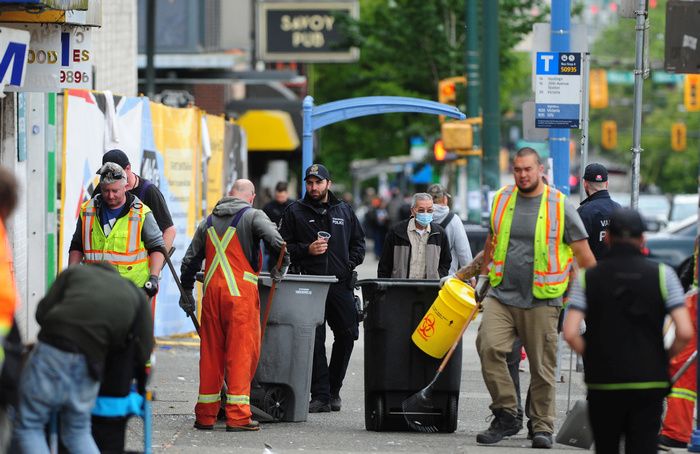 The City of Vancouver said it was working to find an alternative to the controversial practice of “street sweeps” downtown and apologized to those whose personal belongings may have been removed.

He said that frontline street crews are trained to remove material that was abandoned, but acknowledged that some of the items that were discarded may have been important goods.

“We sincerely regret and apologize for any damage and trauma that has been created as a result of this work, and we recognize that important items have been discarded,” Taryn Scollard, deputy general manager of engineering, said in a statement.

The engineering services department, responsible for cleaning streets and sidewalks, is working with residents and organizations such as the Pivot Legal Society and the Vancouver Area Network of Drug Users to identify “long-term solutions and alternative service models to create an that supports the homeless and keeps them and their belongings safe by keeping the streets clean and accessible for all,” added Scollard.

The results of these discussions are expected in the coming weeks.

Scollard also confirmed that effective July 1, city officials will no longer be accompanied by Vancouver police officers on sweeps, which Coun. Jean Swanson referred to as a “harmful practice”.

In a motion, Swanson said there were reports of important items such as family memorabilia, identification documents, blankets, sleeping bags and assistive devices such as walkers “inappropriately confiscated and destroyed” by sweepers.

“Actually, I’ve seen, before I was elected, city officials take people’s tents, sleeping bags and clothes when basically they’re ordered by the boss, which is the city…” Swanson said during a council meeting on Tuesday. -fair. “A city official told me that what they are doing is like playing hit-the-mole because people need to be somewhere and they need to keep moving them.”

Swanson said the city should take a second look at its statutes banning sidewalk structures.

She acknowledged that garbage collection was important, but suggested it could be done in the Downtown Eastside by “colleagues” in “micro-cleaning initiatives”.

Swanson’s motion called for the creation of guidelines on confiscation, including giving people at least 24 hours’ notice before their belongings were seized, providing a receipt with details of what was taken and instructions on how to retrieve it.

It also called for the establishment of a secure storage facility and the expansion of living areas, green spaces and toilet facilities in the Downtown Eastside.

Scollard’s statement indicated that the team will incorporate items from Swanson’s motion, although it did not provide details on what recommendations would be included.

Swanson’s motion was forwarded to staff for consideration in an upcoming board report on the matter.

— with files by Susan Lazaruk