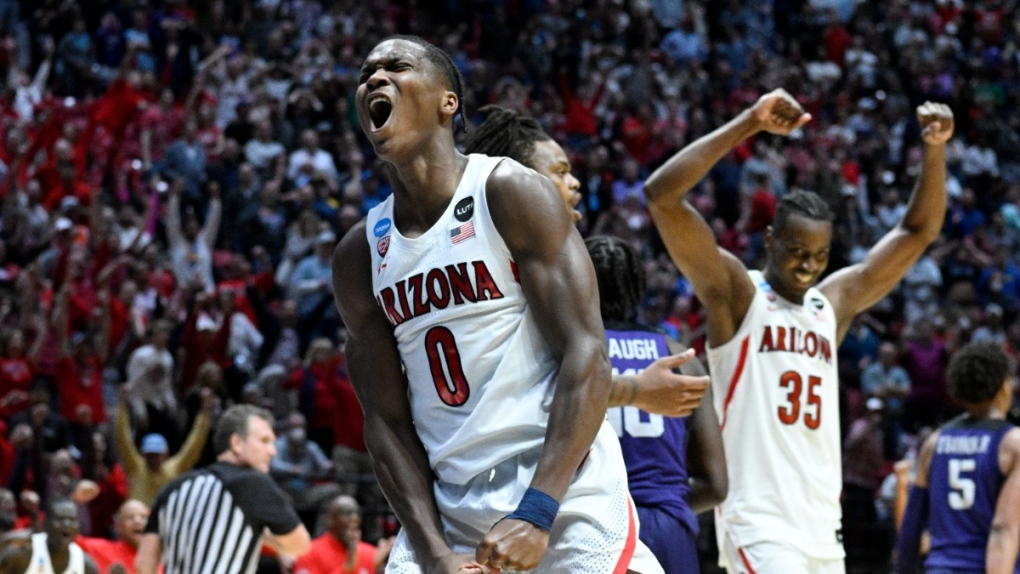 Canadians Bennedict Mathurin and Shaedon Sharpe have followed very different paths for the NBA, but their professional dreams were realized within minutes of each other on Thursday.

Mathurin, a 20-year-old from Montreal who served at the University of Arizona, was selected sixth by the Indiana Pacers. Moments later, the Blazers gave Sharpe, a 19-year-old from London, Ontario, who hasn’t played a single college game a chance, with the seventh pick.

“I feel like I’m a winner,” Mathurin said. “I’m a very competitive guy. Off the court, I feel like a really funny guy. I like to do a lot of fun things.”

It’s only the second time in history that two Canadians have made the top 10 in the NBA draft. In 2014, Andrew Wiggins was picked first overall by Cleveland, and Sacramento took Nik Stauskas with the 8th pick.

Two more Canadians came back in the second round. Gonzaga point guard Andrew Nembhard joined Mathurin in Indiana, selected by the Pacers in 31st place, while Caleb Houstan was selected in 32nd place by Orlando.

The Pacers now have three Canadians, along with Toronto native Oshae Brissett.

Canada has had 37 players chosen since the draft went to two rounds in 1989, the second most of any country behind the US.

“What a night for four young men who achieved their dreams by working hard and representing Canada with pride. And Canada is proud of them! See you soar,” tweeted Canada Basketball CEO Mike Bartlett.

The 6-foot-3 point guard/striker became the first Canadian to attend the NBA Academy in Mexico City in 2018. The draft broadcast showed live footage of the academy’s current players cheering him on.

Mathurin then played two seasons at the University of Arizona, winning Pac-12 Tournament Most Outstanding Player honors, and averaging 17.4 points and 5.6 rebounds per game this year.

He scored 30 points in a big game in the second round of March Madness, helping Arizona beat Texas Christian University in overtime.

“We have a very good team and I’m looking forward to making an immediate impact,” Mathurin said. “The team was very good to me when I went there for my team’s training. I feel like they believe in me. Having people trust my game is great.”

Mathurin, whose parents are from Haiti – he speaks English, French, Spanish and Creole – hugged his mother and sister before walking up to the stage at the Barclay Center. He received rave reviews for his black and burgundy floral suit.

Sharpe, a 6-6 wingman, was a five-star recruit when he enrolled in Kentucky in January. But he never played for the Wildcats, and while that was expected to change in 2022-23, he raised eyebrows as he declared for the draft. He hasn’t played significant five-on-five action since a high school game in October.

“Going from high school to college and not playing your college season and then straight to the NBA is a great journey. But every step of the way I just struggled and enjoyed it,” Sharpe said.

“He’s a great point guard and he’s been in this league for a while, so I can’t wait to really learn from him,” Sharpe said.

Nembhard, who played for Canada at the 2019 World Cup in China, spent four years in the NCAA, moving from Florida to Gonzaga over the past two years. Gonzaga went undefeated in the 2020-21 regular season before losing to Baylor in the NCAA Finals. The Bulldogs were eliminated in the third round this year.

The 22-year-old from Aurora, Ontario, did well in the Draft Combine last month, dominating a five-on-five fight with 26 points and 11 assists.

Houstan, a 19-year-old from Mississauga, Ont., has averaged 10.1 points, 4.0 rebounds and 1.4 assists with the University of Michigan this season.

Coach Nick Nurse said it was a great night for the Canadians.

Nurse added that Nembhard was “spectacular” when he came to Toronto for training.

“So another great night, really, for Canada and basketball in the country,” the coach said. “And congratulations to not just all these guys and their families, but all the coaches who helped get these guys there.”


This report by The Canadian Press was first published on June 23, 2022