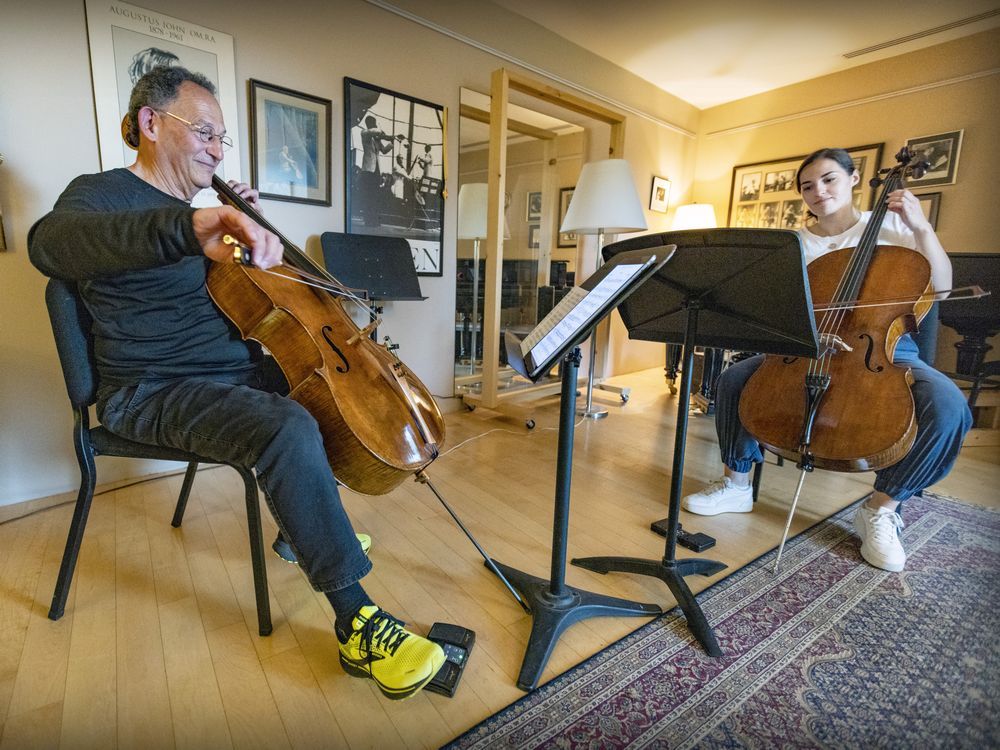 Denis Brott is beaming. He is rehearsing a rousing cello duet with Yoanna Prodanova, his former student, in his office/studio at the Plateau’s Montreal Conservatory of Music.

Prodanova is one of 47 musicians who will perform during the 27th Festival musique de chambre Montréal, starting on Sunday at the Salle Bourgie.

“Music transcends everything… it’s a language of its own,” says Brott, founder and artistic director of the lively festival, during a break.

He’s playing with Prodanova, recalling how when they first met 15 years ago, she had a decidedly gothic look and a penchant for Finnish heavy metal.

“I still love heavy metal,” says the smiling London-based Prodanova. “I love all the songs.”

Music was also a savior for Brott. Denis’s smile almost belies the fact that the last two years have been absolutely brutal for the Brott family.

Denis’s conductor brother Boris Brott, artistic director of Orchester classique de Montréal, was tragically killed on April 5 after being hit by a car in a hit-and-run while walking near his home in Hamilton.

The festival’s closing concert on June 19, featuring works by the famous Israeli composer Avner Dorman, Beethoven and Mendelssohn, is dedicated to Boris. Along with luminaries from the world of classical music will be Denis on cello.

It’s nothing short of miraculous that Denis can set up a festival and play, much less that he’s still alive. In March 2020, he was crushed by COVID-19 after returning from a series of European shows. He spent 32 days in an induced coma on a ventilator. His prognosis was grim, having suffered all sorts of infections, liver and kidney failure, not to mention terrifying hallucinations. Nor did his ordeal end after being released from the hospital. Weeks later, he tried to pick up his cello, but found the strings looked like barbed wire.

After undergoing a lot of physical therapy and other treatments, Brott is practically back in fitness again, but continues to mourn his brother.

“The irony is that, as brothers, we can have hard times and good times. One day we love each other and the next we want to wring each other’s necks,” he says. “We came out of a difficult time. I’d called him on his birthday in March and told him he had to come to my house in the Laurentians, where he’s never been. So we set a date to come in April to try to get closer, because we’ve grown apart a little… and flesh and blood is flesh and blood.”

But fate cruelly intervened before this meeting could take place.

“I was here in my office teaching when my phone rang. It was my daughter asking if I was seated. She said, ‘Boris just died.’ I just ran out of the room. Then followed all the mishegas (madness) when someone dies. I went through it with my mom and dad,” he says in reference to his virtuoso cellist mother Lotte Brott and violinist/conductor/songwriter father Alexander Brott.

For Boris’ funeral in Hamilton, Denis was able to put together – in just two days – a performance featuring some of the best musicians they’ve both worked with.

“All the artists I asked said they were there for it and canceled all appointments they had to be there. It was all so exciting. So I gave a eulogy, regretting all the things that weren’t, but also celebrating what was. Playing and then speaking at the funeral was very difficult, but you find the strength you didn’t think you had.”

Denis also organized a group of musicians to play here at Boris’ internment on the Brott family’s grounds at Mount Royal Cemetery.

“I used to joke about sometimes calling our family the Swiss Family Robinson. But it’s really unbelievable what my parents did in Montreal and the tradition and the standard they set so high for their children. Boris certainly caught up with him. I don’t know if I have, but we each did our own thing.

“Life is so precious and it can be taken at any time, whatever our age. This was the case with Boris. I’m going through a metamorphosis, almost losing my life, being among the 10% that survived (the COVID-19) that I had and being in this altered state that I’ve been in for so long.”

Pointing to his cello, he says, “But this box with four strings and the music and the connection that it has regenerated me and made me realize what matters. The fact that I can play again is very important to me. It’s appreciating why I got into this in the first place and why I love what I do – being able to speak to music through emotions. It’s a privilege.”

No festival in 2020 due to its COVID-19 status and with 2021 being limited to online, this year’s event has also been regenerated. In addition to the closing concert, highlights include Gershwin Rhapsody in Blue on Sunday and the Zuckerman Trio, with world-renowned violinist Pinchas Zukerman, performing works by Brahms and Beethoven on June 15.

“It’s an incredible kindness to put it all together,” he says. “It’s about passion. That’s the beauty of playing music: you keep learning, growing and getting inspired.”