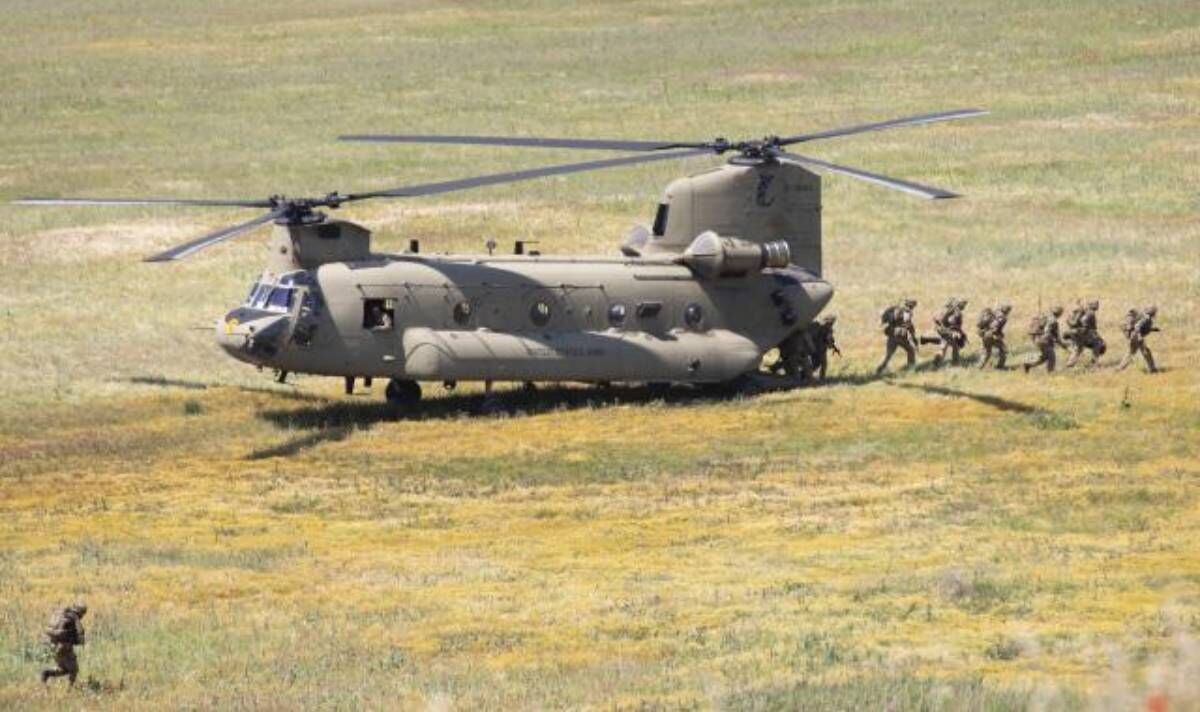 Around 2,000 troops, mostly from the 16th Air Assault Brigade Combat Team, along with Apache attack helicopters, Chinook helicopters and artillery were deployed to North Macedonia to provide vital assurance to countries that are “most dependent on NATO for survival.” ”.

Brigadier Nick Cowley, who commands the 16th Air Assault Brigade Combat Team, which is leading NATO exercises in North Macedonia, admitted that he thinks “all the time” about how his troops could be ordered to defend Europe, thanking you also for your bravery.

Lieutenant Colonel Alex Harris said British troops were “prepared for war”, adding that the conflict in Ukraine highlighted the importance of NATO and its allies working together.

The Daily Express heard how precision planning, tactical skill, flexibility, high levels of training coordination with allies are key components of all British exercises and operations.

Brigadier Nick Cowley, commander of the 16th Air Assault Brigade Combat Team, told the Daily Express how his troops could be ordered to fight: “I think about it all the time. But I also try to remind our young soldiers of the decision they made to serve in the army.

“My messages to them are of gratitude for what you are doing, because there are many young people who have not made the conscious choice to sacrifice themselves for values ​​related to their nation, freedom, national interest. And to remind our young soldiers that we have a huge responsibility to make sure we’re ready, because maybe we need to go and fight for our freedom.

“It’s very present and I think it’s something we need to keep remembering.

“This is definitely a very serious business. I think it’s something we took for granted outside of the defense community for a while.

“We assumed that the international order would remain or even that liberal democracy would spread. I think this is being threatened and this is really focusing our minds.”

Asked whether British troops are ready if Britain gets involved in a conflict, Brigadier Cowley said: “Absolutely. 16 Air Assault Brigade is all about readiness.

“The most important part of readiness is the mindset.

“Our soldiers are physically very fit, mentally strong, their bergens are packed, they are fully skewered, their weapons are zeroed and this is 24/7.

“What we saw in the evacuation of Kabul is that even the troops that weren’t under orders were ready at a very short notice and everyone arrived anyway and said we are ready and ready.

“The second wave was from all the people who beat their readiness schedules and were all green in every aspect. For me readiness is an obsession and everyone is focused on that.

This, as a NATO readiness, would be my number one message.”

Asked what signal the Kremlin would receive from the exercise, Brigadier Cowley added: “We have eight different nations here.

“I hope this shows any adversary that we can really come together in a really complex environment, create something credible and then go out and do operations.”

British troops landed in a poppy field under the cover of air support to secure and defend the territory before joining with the allies to take multiple targets across the simulated enemy area.

“On Monday you can go to work normally, on Saturday you can be in a different country in a very different environment.

“No one is desiring war. But you have to be prepared for it. And that’s very much on everyone’s mind.”

And the biggest war in Europe since 1945 made everyone realize that conflict is on our doorstep, said Lt. Col. Harris: “I did Iraq and Afghanistan, it seemed like most people were very far away, taking days to get there.

“When we went to Europe, we were there in a matter of hours in some cases.

“We ourselves fly the aircraft over more familiar countries. People go on vacation to France and Germany and then you’re almost there.

“When you go to the other side of the world, you have more time to reflect that you are going far away.

“Sometimes when you’re in a garrison town, people don’t pay much attention to you.

“Right now, people at the school gates are asking where I went. It’s at the forefront of everyone’s mind.

“There is pride in NATO.”

Lieutenant Colonel Harris said that NATO’s planned military exercises show “resolution” for “those countries, perhaps in the Baltic, that are most dependent on NATO for survival.

Warrant Officer John Willis, Sergeant Major, 2nd Para, said: “If NATO or the UK decides to get involved, we are ready to do so.

“Looking at the history of this regiment, the ethos – we have never failed in any challenge given to us.

“We always stand out when it matters.

“There is a lot more training as things like drones are being introduced.

“It’s not just about being able to fire a gun. There’s a lot more technology. We need to keep up to date with this.

“We need to be at the forefront of what is happening on the battlefield.

“Sends a strong message. The UK is one of the top countries, if not the top country in Europe, and we are a big player and that shows the support we have in NATO and globally.”

Vladimir Putin abandoned plans to take Kiev after Russian Airborne Forces failed to secure the strategically important Antonov Airport and a massive column of tanks and armored vehicles became bogged down, causing them to run out of fuel and food.

The invasion was also plagued by chaos as Russian generals hide their losses from their commanders and troops on the ground refuse to take orders, with Moscow still not securing air superiority.

Western intelligence officials also recounted how the Russians failed to secure air superiority to provide cover for their troops – forcing them to rely on artillery.

Warrant Officer Willis added: “I don’t think we would make the same mistakes.

“We are well rehearsed. Our training lends itself to that and we’ve been doing it for years.

“Being a parachute regiment always has that logistics issue. We have attachments with units that we drill regularly with.”

They also revealed how horrified they are at the use of Russian artillery – the bombing of hospitals, schools and shelters – and fear that all soldiers could be hit with the same brush.

Major Drew Houston of 7 Para RHA, 37, told the Daily Express: “What you see in real life is if you go it alone, it’s not going to work.

“If you are integrated, with those capabilities, you are a more lethal and capable force.

“It’s one of the things that will suppress an enemy, allow your troops to break contact and stay safe. It’s the only one that’s available 24/7 365, no matter the weather, it’s the only capability that will always be there.

“It just takes a little time and the air will be turned off. These are old lessons that are being reinforced.

“The big difference between UK and Russian doctrine is that we will use fireworks [assets such as artillery, attack helicopters or fighter jets] to support infantry manoeuvre, while the Russians, their doctrine is based on much more firepower and movement around that firepower, not the other way around. It’s a different way of using artillery. It is difficult to make a comprehensive judgment, but absolutely, there are lessons for both sides.”

Asked whether discussions about the accuracy of artillery strikes have intensified since the Russian attack on Ukraine intensified, Major Houston said: be identifiable on ground targets.

“It’s always very controlled. We are still applying precision, but precision in a layered area with very accurate Apache weapons and fast jets.”

Asked how he felt to see the use of Russian artillery, Major Houston replied: “Frustrated.

“For me, when I say frustrated, it’s because of how we apply that as a capability and our level of control. It’s more of a frustration of the common understanding that it stains you. People think ‘oh you’re just a guy on our side’. Not.

“On a human level, it is tragic, horrendous, to see the use of artillery in shelters that have civilians, shelters, schools, things that are simply not options for us.

“As a person, horrified, as a professional, I don’t like the risk of being discredited by someone who doesn’t understand things by saying ‘this is what you do’.