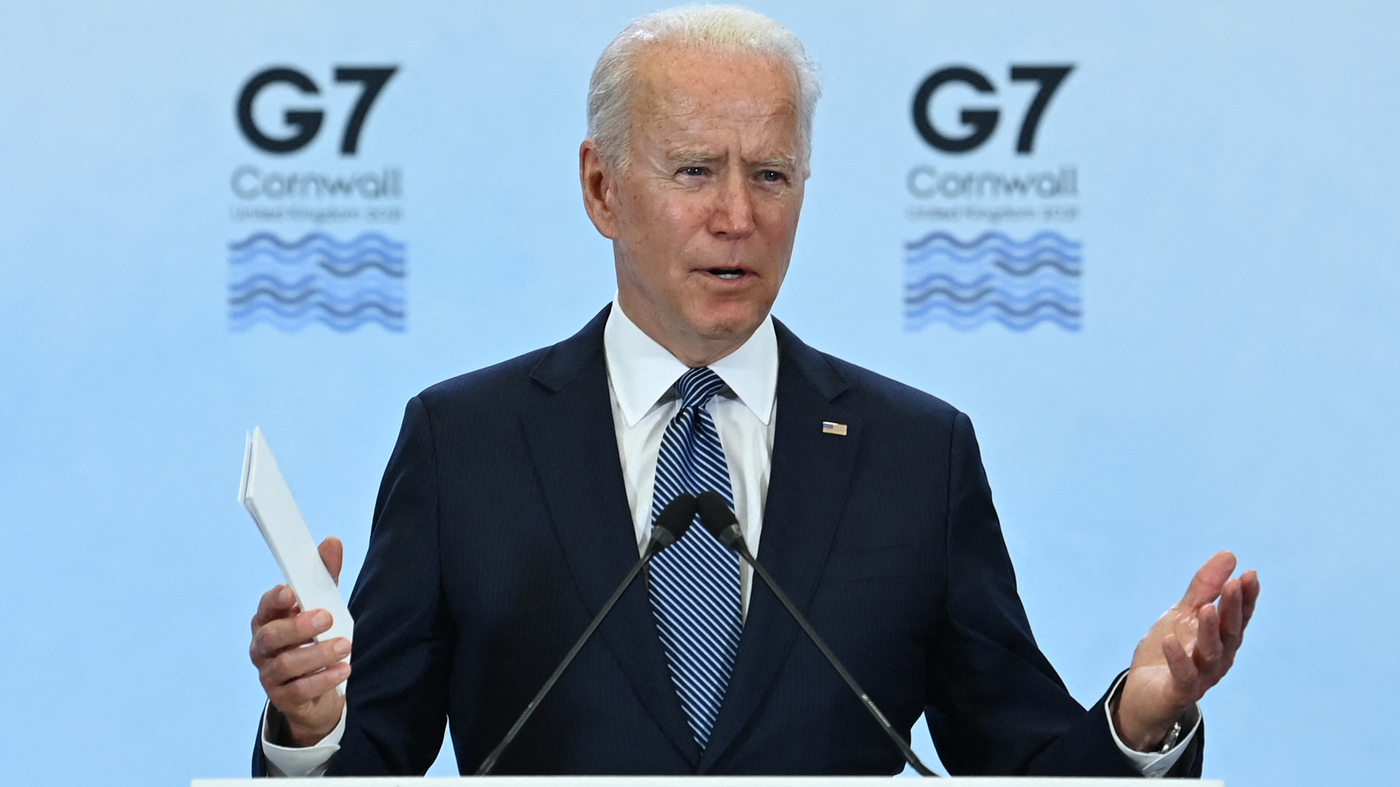 Last year, President Biden announced “Building a Better World,” intended to compete with China’s Belt and Road Initiative. This year, at the G-7, Biden will present the first projects.

Last year, President Biden announced “Building a Better World,” intended to compete with China’s Belt and Road Initiative. This year, at the G-7, Biden will present the first projects.

When President Biden met with the leaders of the Group of Seven (G-7) a year ago — his first trip abroad in office — he pressed them to put their weight behind a plan meant to be an alternative to Chinese project funding. infrastructure around the world.

It would be called “Building a Better World” – a play on Biden’s brand for reforming the domestic economy. “What’s happening is that China has its Belt and Road Initiative. And we think there’s a much fairer way to address the needs of countries around the world,” he said after launching the effort.

China has been building roads and bridges and other major projects in Asia, Latin America and Africa for more than a decade, gaining a foothold in countries desperate for funding – and extracting economic and political concessions along the way. So Biden’s proposal was to offer a more attractive choice.

“It is a transparent, high standard and values-driven funding mechanism. We will provide and support projects in four main areas: climate, health, digital technology and gender equity,” said Biden.

Since then, his advisers have worked on the initiative, mostly quietly. There has been little tangible progress to announce. But at this year’s G-7 summit, which begins Sunday in Germany, Biden plans to relaunch the effort — under a new name — and present some early blueprints to show how the plan will work.

“It will launch a partnership for global infrastructure, physical health and digital infrastructure that we think can provide an alternative to what the Chinese are offering – worth tens and ultimately hundreds of billions of dollars when you add in what our G-7 partners will do the same,” Jake Sullivan, Biden’s national security adviser, said at a conference in Washington last week.

“We intend this to be one of the hallmarks of the Biden administration’s foreign policy for the remainder of his term,” Sullivan said.

This is not the first time the US government has committed to fighting China’s Belt and Road Initiative. Previous administrations have spoken of wanting to leverage private funding to support projects in the developing world.

“Looking at what we’ve seen, every iteration of an American-led response to the Chinese infrastructure project has underperformed,” said Gyude Moore, a former minister of public works in Liberia.

“I really want to hope, I do,” said Moore, now at the Center for Global Development. “It’s just – looking at everything as it exists, it’s hard to imagine which rabbit they’re going to pull out of this hat.”

Brief topic in this article about the Global Infrastructure Partnership Formerly Known as Build Back Better World.

More infrastructure for the developing world is great, upholding values ​​of competition, openness and transparency is great.

B3W shaping up to not do too much of both. https://t.co/dU7LXin1Om

When the G-7 launched Build Back Better World – or B3W for short – the world economy was in a very different place.

“There was a sense that they would be…coming out of COVID globally, in a very strong position to have a few years of very positive growth and rebuild,” said Zack Cooper, a senior fellow at the American Enterprise Institute specializing in US strategy in Asia. .

“Now people are talking about going back into recession. I think this is a very different environment to have that conversation,” Cooper said.

Autorickshaws are lined up to get fuel in Colombo, Sri Lanka, on Monday. COVID and energy price spikes have exacerbated deep economic problems in the country.

Autorickshaws are lined up to get fuel in Colombo, Sri Lanka, on Monday. COVID and energy price spikes have exacerbated deep economic problems in the country.

With the lack of progress, countries were disillusioned

Developing economies have been particularly hard hit by COVID and rising energy and food costs. While US officials talked about B3W around the world, countries in Latin America, Asia and Africa didn’t see much action.

“Countries are in trouble. They need resources. There are opportunities that the Chinese are offering and the US cannot match them,” said Michael Shifter, former president of the Inter-American Dialogue, who maintains regular contact with Latin American leaders.

“After a while, people get very skeptical and say, ‘This is not happening,'” Shifter said, explaining that leaders recognize that the war in Ukraine has occupied US attention and funding. “Expectations, I think, have really lowered, and I’m not sure everyone is really expecting much at this point, unfortunately,” he said.

While the program’s intentions have been applauded, there are many questions from low- and middle-income countries about whether there is real money behind it, said Ian Bremmer, president of the Eurasia Group, an international consultancy.

“Whenever you talk to US officials, they say, ‘Well, if you don’t want us to invest in China, give us an alternative. Right? If you don’t want us to partner with Beijing, and all this money they’ I’m offering, well, where else should we go? You have nothing left.’ So that’s what it’s supposed to be,” Bremmer said.

“And there’s just one problem, and that is that we don’t have the money to finance it,” he said.

President Biden’s National Security Adviser Jake Sullivan (second from right) walks the South Lawn of the White House in this May 1 photo. Sullivan says US government funding for the renamed partnership could be relatively modest.

President Biden’s National Security Adviser Jake Sullivan (second from right) walks the South Lawn of the White House in this May 1 photo. Sullivan says US government funding for the renamed partnership could be relatively modest.

The White House has objected to skepticism about the bill. A senior government official told reporters that “it has been a year… of going out and doing the hard work of realizing this declaration of intent” with partners around the world and the private sector, and that the “formal launch” at the This year’s G-7 would make the program’s objectives clear.

People briefed on the relaunch say the program will now be called “Partnership for Global Infrastructure” – avoiding the “Build Back Better” branding that foundered domestically when lawmakers, including Democratic Senator Joe Manchin of West Virginia, declined the cost.

There are also questions about how much money Congress will be willing to devote to the renamed partnership.

“What we’re really trying to stimulate is a long-term economic relationship rooted in private sector investment – not massive transfers of money from the US Treasury to these countries,” Sullivan said at a conference held by the Center for a New American Security. .

“That means taking relatively smaller amounts of money and leveraging significant investments from the private sector to add up to billions and ultimately tens of billions of dollars,” Sullivan said.

Cambodian Prime Minister Hun Sen cuts a ceremonial ribbon for a stadium in Phnom Penh paid for by the China Belt and Road Initiative in this December 2021 photo.

Cambodian Prime Minister Hun Sen cuts a ceremonial ribbon for a stadium in Phnom Penh paid for by the China Belt and Road Initiative in this December 2021 photo.

It is not yet clear whether private funds will invest in these projects.

In theory, the partnership concept could work, says Matthew Goodman, who has advised President Barack Obama on national security and the economy. For projects with a US government seal of approval, the idea is that private sector money would flow from pension funds, hedge funds, private equity funds and insurance.

“We have more than $100 trillion – $100 trillion – far exceeding what Shina can deliver through the Belt and Road,” said Goodman, now at the Center for Strategic and International Studies, a think-tank.

But these funds need to be convinced that they can generate a return on their investment. And there is risk in investing in projects in countries where markets can be opaque and the rule of law is unstable by Western standards, Goodman said.

“The question is, is this really going to tip the balance and encourage massive funds in the US to make these investments? And I think that’s still an open question,” Goodman said.

Moore, Liberia’s former public works minister, said developing countries would be happy with any additional investment in projects, given the state of the global economy. But he was less optimistic that the private sector would come to the rescue based on past experience.

“The private sector is organized for profit,” said Moore. “If there were opportunities, they would go for it themselves.”