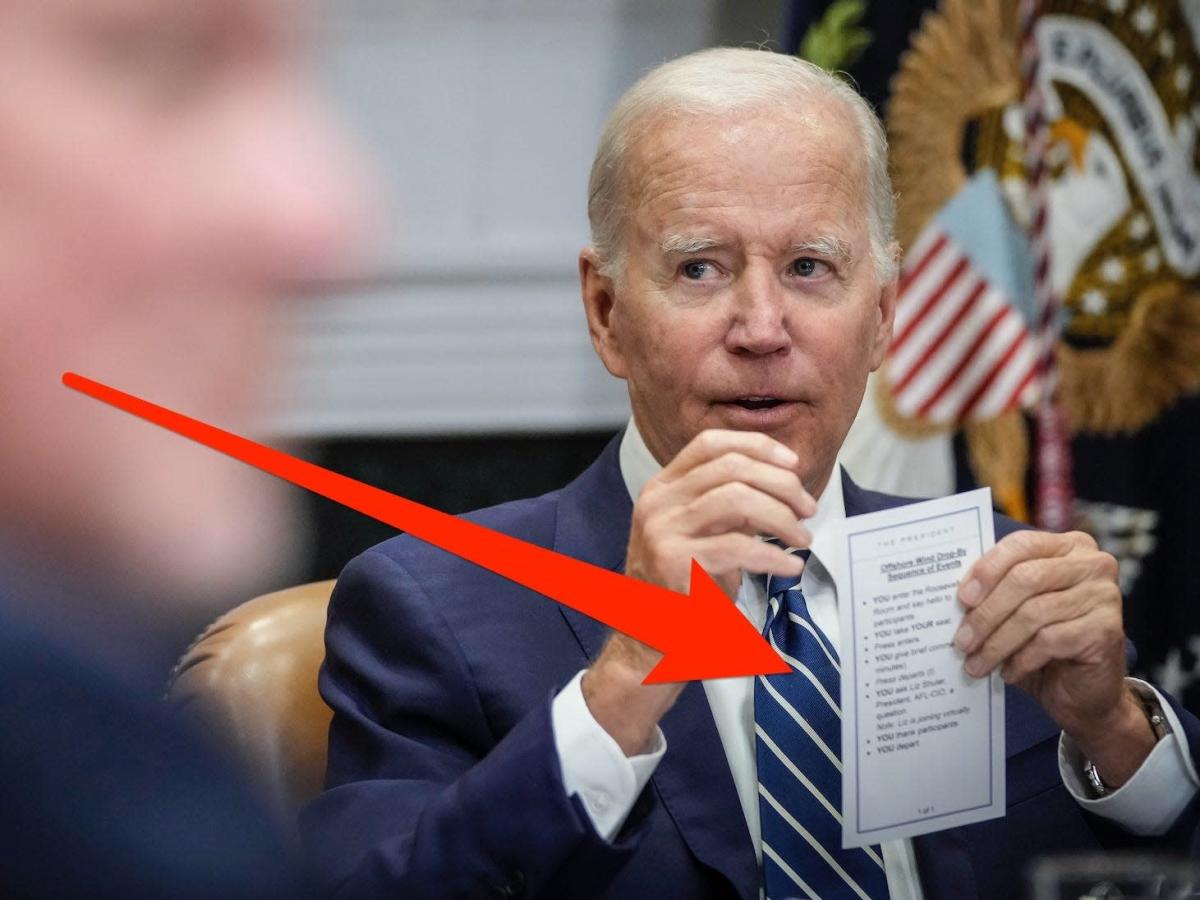 President Joe Biden accidentally revealed a cue card at a White House meeting on Thursday, offering a glimpse of very simple instructions for the meeting process.

Biden made remarks in the Roosevelt Room to a meeting of state governors about partnering with 11 states to accelerate the growth of the offshore wind industry and its domestic supply chain in the US.

The photographer documenting the event captured one of the documents Biden used during the meeting: a suggestion card titled “The President” with the event’s title, followed by instructions apparently for Biden.

A photo of the list, which is a little blurry, can be seen below:

It is not uncommon for a leader’s press team to produce a memo of events, including instructions for the speaker. The White House press office did not immediately respond to Insider’s request for comment on Friday.

But the simplicity of the instructions – which included “YOU GET OUT” at the end – caused speculative comment among Biden’s political opponents, including former far-right presidential aide Steven Miller.

Miller tweeted, in reference to the card, “There needs to be emergency hearings next year on the 25th Amendment,” the amendment that refers to the removal of a president who is incapacitated. There is no evidence that Biden is incapacitated.

Right-wing media also treated Biden being seen with this list as a serious faux pas, with key figures in the daily caller, the daily threadand satire site the bee of Babylon commenting on it.

At the event, Biden kept his often repeated posture connecting renewable energy to the economy: “When I think ‘climate’, when I think ‘environment,’ I think ‘jobs,'” he said.

In March 2021, the Biden administration announced a goal of producing 30 gigawatts of offshore wind power by 2030. In doing so, the government says it will produce 77,000 jobs and avoid 78 million metric tons of CO2 emissions.

“The last administration tried to block offshore wind power because it thought it could cause cancer. It’s no joke,” Biden said Thursday, referring to comments made by former President Donald Trump in 2019, alluding to a long-ago conspiracy theory. very unmasked.