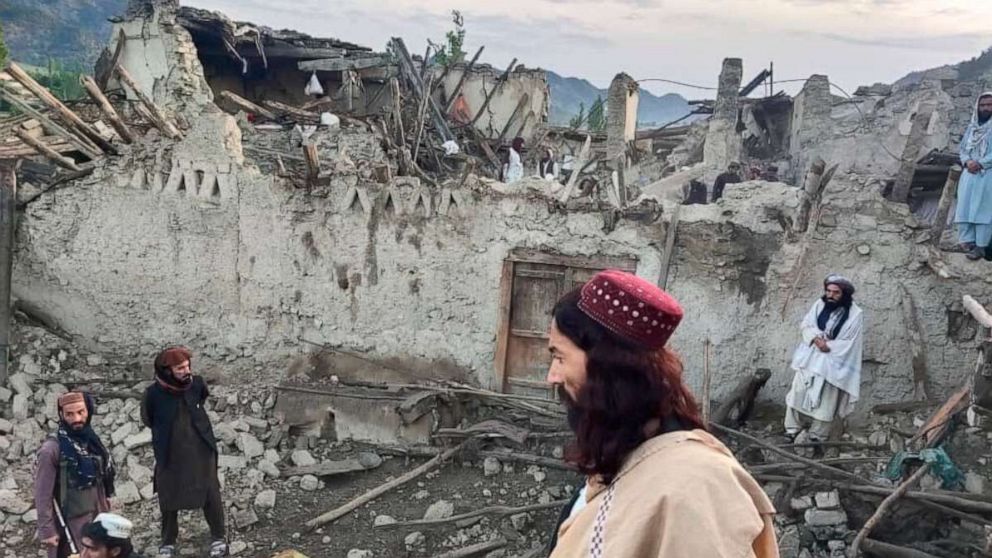 LONDON — At least 1,000 people died and more than 1,500 were injured in a massive earthquake in eastern Afghanistan, according to the country’s state media.

The US Geological Survey recorded the magnitude 5.9 earthquake near the Pakistani border at around 1:30 am local time.

“We are deeply saddened by reports of an earthquake in eastern Afghanistan,” the US Embassy in Kabul said on Twitter. “We offer our sincere condolences to all who have been affected by this devastating event.”

The death toll continued to mount throughout the day as rescue teams arrived in the mountainous area around the quake’s epicenter. People were still being pulled out of the rubble as wind, rain and snow hampered efforts, said Dr. Ramiz Alakbarov, deputy United Nations special representative and humanitarian coordinator for the country, told ABC News.

Mawlawi Sharafudin Muslim, deputy minister for disaster management, told reporters on Wednesday that at least 920 people had died and at least 600 were injured. He warned that the already tragic number could rise.

A journalist at the scene told ABC News that many of the victims died in their homes when the earthquake struck in the middle of the night, while many slept. The earthquake destroyed homes and downed communication, resulting in a near-total blackout.

“People were shocked by the coup and many lost their lives in their homes,” said the journalist.

Many of the affected villages are in remote areas with difficult access routes for emergency teams. The few photos that have been published since the earthquake showed helicopters transporting the injured away from the area.

About 1,800 homes were destroyed, according to the Norwegian Refugee Council.

Mohammad Hasan Akhund, the Taliban’s interim prime minister, announced that the country will allocate more than $11 million to “urgently address the plight of the families of earthquake victims and victims in Paktika and Khost provinces,” the news agency reported. Bakhtar.

The quake’s epicenter was in Paktika province, about 44 kilometers southwest of Khost, the Pakistan Meteorological Department said. That service, which put the magnitude at 6.1, recorded the quake at a depth of 31 miles.

“I am saddened by the loss of precious life by the earthquake in Afghanistan & express my condolences to those affected,” Arif Alvi, President of Pakistan, said on Twitter. “I pray for the dead, for the wounded and offer condolences to the bereaved families. Pakistan stands in solidarity with the people of Afghanistan in this time of need.”

Pope Francis offered condolences to those affected by the earthquake.

“In the last few hours an earthquake has caused casualties and great damage in Afghanistan,” he said during his weekly audience at the Vatican. “I express my closeness to those injured and affected by the earthquake, and I pray in particular for those who lost their lives and their families. I hope that with everyone’s help we can alleviate the suffering of the dear Afghan people.”

China said it would offer emergency aid to Afghanistan, according to the country’s ambassador in Kabul.

“We are willing to provide emergency assistance as per the needs of the Afghan people,” the ambassador said in a tweet, adding that China is in “close contact” with relevant parties.