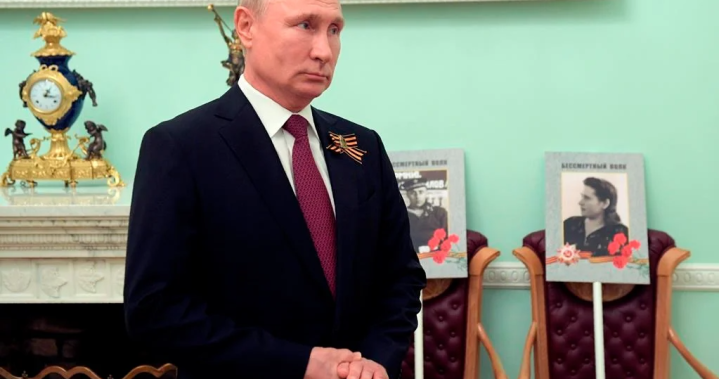 Moscow residents looked anxious but resilient as the country prepared on Sunday for its annual commemoration of the Soviet victory over Nazi Germany, with an economy suffering from the West’s most stringent economic sanctions in modern times.

As Russia’s military operation in Ukraine nears the end of its third month, President Vladimir Putin will highlight the enormous sacrifices made by the Soviet Union to defeat Adolf Hitler in World War II in a Victory Day speech in Red Square on Monday.

Sanctions imposed by Western countries since Putin launched the February 24 invasion of Ukraine have plunged Russia into its worst economic crisis since the years following the fall of the Soviet Union in 1991, though the Kremlin says it will increase its own production as seeks new markets in Asia.

Russia’s Victory Day on May 9 will not affect Ukraine’s war, says foreign minister

Some Russians said they were anxious and emotional about the close family ties between the two largest East Slav populations now torn apart by the conflict.

“Emotionally it affects you because I have two sisters living in Ukraine,” said Larisa, a Muscovite who spoke to Reuters. “Of course, it’s very difficult to communicate with them now – very difficult. They have their own information war going on right now.”

But Larisa, who like several others spoke on the condition that her last name not be used, also said patriotism is growing in Russian society.

“In Russia as a whole, there is a lot of cohesion now among the masses regarding these events: what I can say is that patriotism is growing,” said Larisa, in Moscow’s wealthy Patriarshiye Ponds area.

One man, Dmitry, spoke of the “constant tension” of the situation, while a woman named Evgenia said the conflict was a blow.

1:38
Russians will not march victorious through Kiev on May 9: White House

Russians will not march victorious through Kiev on May 9: White House

“For me, this is a very strong psychological blow, and almost all of my inner circle is going through the same thing,” said Evgenia, who mentioned many “for sale” signs in her Moscow area.

Victory Day is an important holiday in Russia these days. The Soviet Union – made up of Russia, Ukraine and other Soviet republics – lost 27 million people in World War II, more than any other country. Putin has criticized in recent years what Moscow sees as attempts by the West to revise World War II history to downplay the Soviet victory.

Putin says he has launched what he calls a “special military operation” in Ukraine to stop the West from using Ukraine to threaten Russia and root out people he calls dangerous nationalists. Ukraine and the West say Russia has launched a war of unprovoked aggression.

In an elite Moscow restaurant, there was a foreboding mixed with a budding confidence that Russia would resist — and even use the crisis as an opportunity to thrive in the long run.

Maria Podzolko, director of Selfie, a restaurant awarded a Michelin star last year, said some of the exuberance had disappeared – and wine prices had risen sharply because there was still not enough domestic production.

“Selfie is an expensive restaurant – there is a certain contingent of guests here for whom the crisis is more emotional than economic,” Podzolko told Reuters.

“Almost all the birthdays have been cancelled,” Podzolko said. “Corporations canceled all major events because everyone was hostage to such deep stress and our fine dining suffered the most.”

As chef Anatoly Kazakov has always worked with Russian products, Selfie still offers a menu of delicacies, including sea urchins from Murmansk, scallops from Sakhalinsk in the Pacific and duck from Rostov in the south.

“The deficit that has been created will provide an opportunity for the development of domestic production and domestic trade,” said Podzolko.

2:06
Russia hopes to step up attack on Ukraine as Victory Day approaches

Selfie, which sits in the shadow of one of the so-called skyscrapers of Josef Stalin’s Seven Sisters, offers a range of Russian wines, although foreign wine is expensive.

The average monthly salary in Russia is 57,344 rubles.