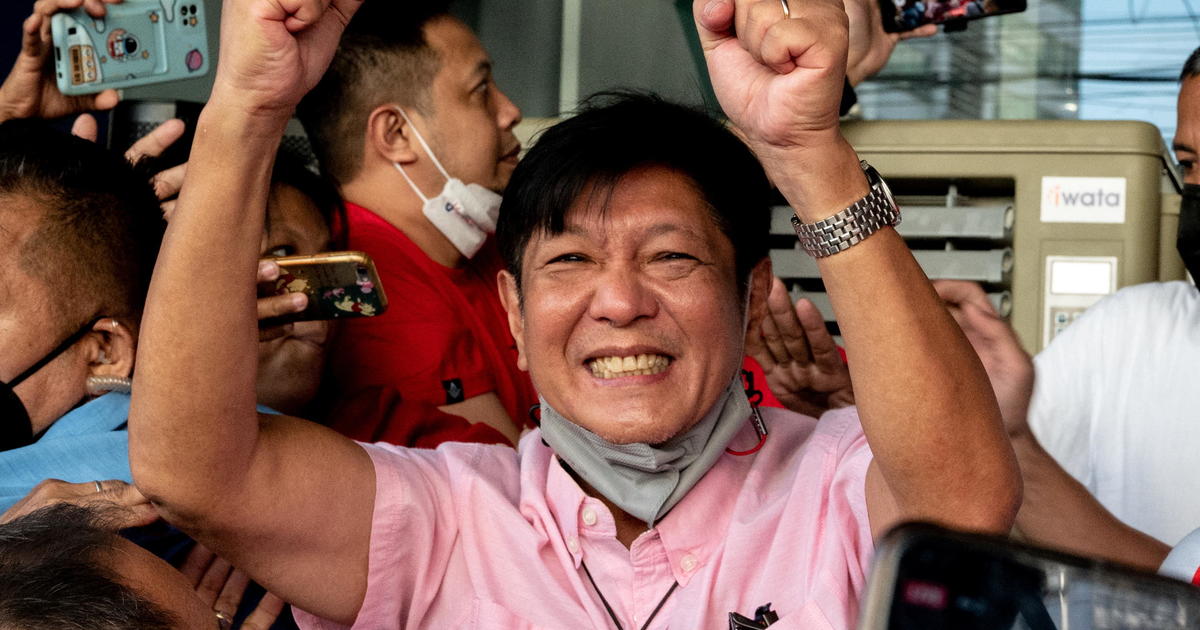 Manila — After winning an overwhelming mandate of more than 30 million votes in Monday’s election, Ferdinand “Bongbong” Marcos Jr. is the president-elect de facto from Philippines. His victory marks his family’s impressive return to power 36 years after they were forced into exile in the United States by a popular power revolution.

The US was allied with her father, the late dictator Ferdinand Marcos, for most of his two-decade rule, half of which the nation spent under brutal Martial Law. But Bongbong, the younger Marcos who is known almost ubiquitously by his childhood nickname, will take office facing a contempt order from a US court for violating an earlier court order that instructed him to pay human rights victims about of $2 billion of the wealth his family plundered from his country.

Bongbong declined to answer questions about the contempt sentence handed down by a Hawaii court in 2011 during his campaign, and has continued to do so since winning the presidency.

“President Biden stressed that he looks forward to working with the president-elect to continue strengthening the US-Philippines Alliance while expanding bilateral cooperation on a wide range of issues,” according to a reading of the White House call.

Aries Arugay, a political scientist who is currently a visiting researcher at the ISEAS-Yusolf Ishak Institute in Singapore, told CBS News that the court order against Bongbong is likely to remain a relatively small blot on a clean slate.

“This is something that I think can be addressed at the State Department level,” Arugay said. “I think the US wanted to start with a symbolic gesture of seriously making the alliance work and improving it post-Duterte.”

Outgoing President Rodrigo Duterte, whose daughter will be Bongbong’s vice president, shifted Philippine foreign policy early in his tenure from being close to the US for China. At times, Duterte attacked the US with his trademark fiery rhetoricc in hopes of attracting more investment and getting more help from Beijing, but most promises have not materialised.

Duterte even threatened to revoke an old Visiting Forces Agreement with the US, but ultimately decided to leave the defense pact unharmed. The Philippines is the oldest US treaty ally in Asia.

While he did not discuss details of his foreign policy, Bongbong was quoted as saying he will promote closer ties with China. Some media outlets even quoted him as saying he could nullify a 2016 international decision invalidating China’s expansive claims in the South China Sea because “China did not recognize it”.

Many believe he will try to forge a bilateral agreement with China to resolve these territorial differences.

“If you let the US in, you make China your enemy,” he told local radio DZRH. “I think we can come to an agreement (with China). In fact, people at the Chinese embassy are my friends. We’ve been talking about it.”

Chinese President Xi Jinping sent a congratulatory message on Thursday through the embassy in Manila.

“China and the Philippines are neighbors who face each other across the sea and partners in good times and bad,” Xi said in the message. “In recent years, with the joint efforts of both sides, bilateral relations have been consolidated and improved, bringing benefits to the people of both countries and contributing to regional peace and stability.”

But the tension over territorial disputes at sea has not gone away. Filipino fishermen continue to grapple with an aggressive Chinese Coast Guard and maritime militia, and Chinese incursions into Philippine waters have sparked dozens of diplomatic protests.

“For pragmatic reasons, I expect the Marcos Jr. administration to keep both sides offering not just signs of goodwill but also practical benefits,” Jaime FlorCruz, a veteran Asia analyst and former head of CNN’s Beijing bureau, told CBS News. “For example, the Marcos Jr. government may try to renegotiate the Mutual Defense Treaty [with the U.S.] and try to maximize the benefits of such a treaty.”

One thing the Biden administration may be watching closely — especially after the tumultuous years under Duterte — is how the new Philippine leadership will champion democracy and human rights.

Mark Jr. and his communications and security teams ignored and harassed traditional journalists, and he suggested altering sections in the country’s textbooks about the Martial Law period during his father’s rule.