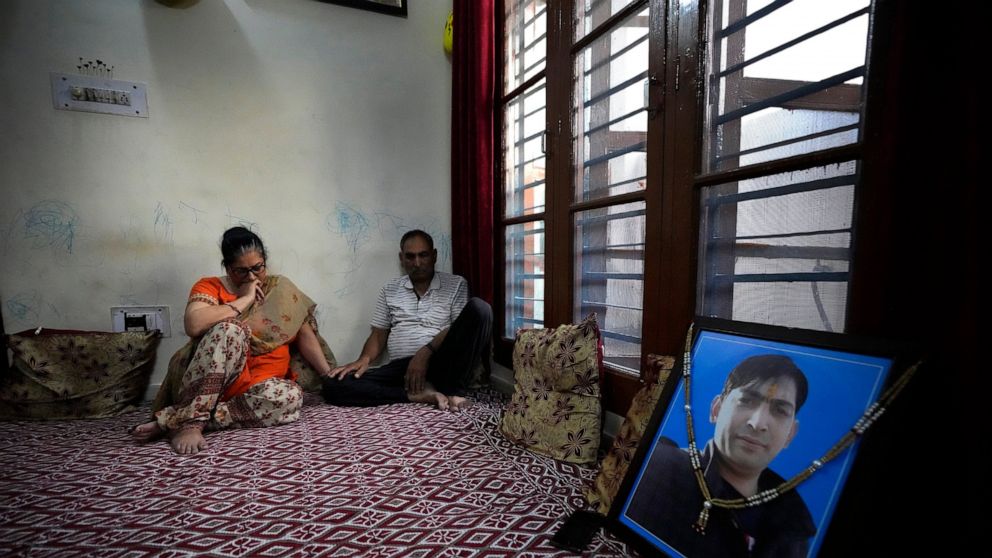 JAMMU, India — Bitta Ji Bhat and his wife are still not reconciled over the death of their son. However, what breaks her heart the most is her 4-year-old granddaughter, oblivious to the reality that her father no longer exists.

“My eyes water when I see my granddaughter playing, not knowing what cruel hands of death have snatched her father away,” Bhat said on a recent afternoon at her modest home in Jammu, a Hindu-dominated, mostly Muslim city. Controlled cashmere.

Bhat’s son, a Hindu revenue worker, was shot dead inside his Kashmir valley office in May. Two days later, police said they had shot and killed the anti-India rebels responsible for a shootout.

This did not alleviate the deep grief of Bhat’s parents.

“What could be more agonizing and painful for a father like me who has had to see his son’s dead body,” said Bhat. In front of him was a framed photo of his son, Rahul Bhat. He was 35 years old.

Kashmir has witnessed a series of targeted killings in recent months. Several Hindus, including migrant workers from Indian states, were killed. Police say the killings – including those of Muslim village councillors, police and civilians – were carried out by anti-India rebels.

Kashmir is divided between India and Pakistan and claimed by both in its entirety. The region’s fury at Indian rule has long been simmering and most Kashmiri Muslims support the rebel goal of uniting the territory, either under Pakistani rule or as an independent country.

Kashmir’s Hindu minority, known locally as the Pandits, have long been concerned about their place in the disputed region. Most of the estimated 200,000 of them fled Kashmir in the 1990s, when an armed rebellion against Indian rule began. About 4,000 of them returned after 2010 as part of a government resettlement plan that provided them with jobs and housing.

The recent murders, however, have heightened their fears. After Bhat’s assassination, hundreds of them organized simultaneous street protests in the region for the first time and demanded that the government move them to safer areas. They accused the government of making them “scapegoats” and “cannon fodder” to project normalcy in the region.

Even so, the deadly attacks on the minority continued.

On May 31, Raj Kumar left his wife outside the government school where she taught social studies. It was a daily routine for husband and wife teachers stationed in the region’s bustling Kulgam district. But minutes later Kumar received a call from the school principal who told him his wife had been killed.

Rajni Bala, 36, was shot dead by assailants while walking towards the school.

Days earlier, the husband and wife had made several appeals to the authorities to relocate them to a relatively safer area, but their requests were refused, Kumar said.

“When I heard that Rajni is no more, the only thought that came to my mind was how my daughter would live without her mother,” he said.