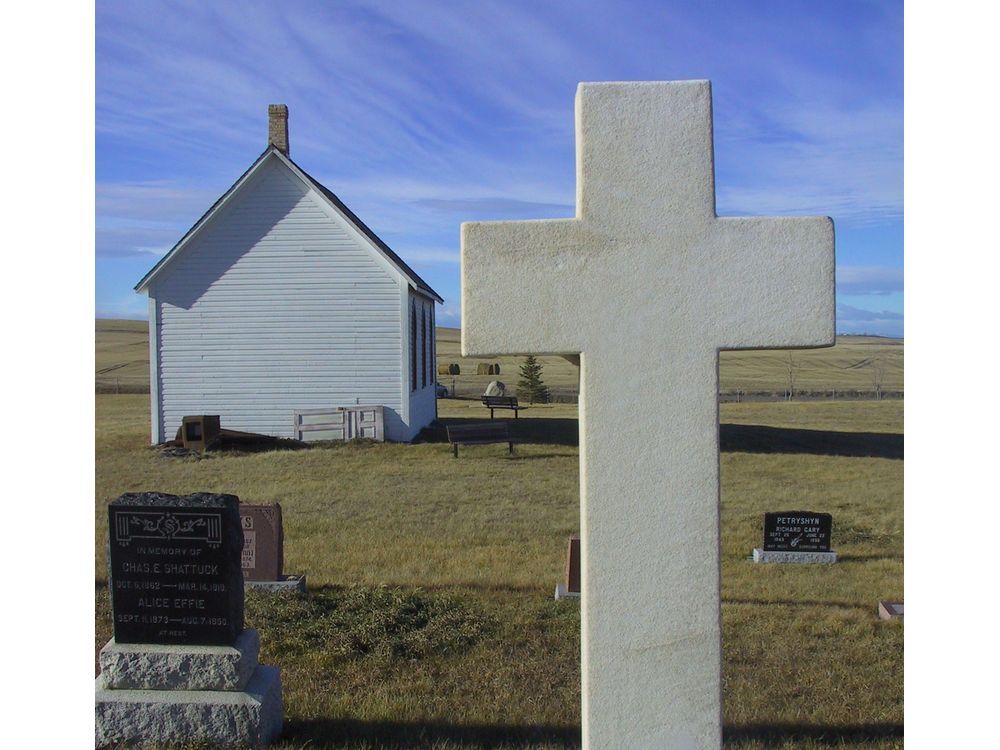 Author, photojournalist and former Calgary Herald journalist David Bly has written many historical pieces for the Herald over the years. The following story was written in 2005.

Many US Civil War veterans buried in Canadian cemeteries

William Hatcher Barnett fought many battles as a private in the Confederate States Army.

He was captured by the Union Army near Richmond, Va., in 1862. He was released in a prisoner exchange a few months later to fight more battles, including Pickett’s Charge in 1863, where he dropped his rifle and picked up the flag from the color bearer who had been shot. The Confederate soldiers suffered huge losses in that battle, but Barnett managed to return with the flag to his own lines.

In 1933, at the age of 90, he came from Virginia to Alberta to visit his sons. Likely worn out from the journey, he died on July 17, 1933, and was buried in the Bottrel Cemetery, about an hour’s drive northwest of Calgary.

He is one of dozens of US Civil War veterans buried in Canadian cemeteries, says Kathy Brown, a Calgarian passionate about Civil War history.

Her interest in Civil War veterans was sparked when an American friend asked her to check on an ancestor buried in Alberta. That ancestor was William Barnett, whose grave lay unmarked for 60 years.

In 1993, members of the 8th Texas Unit, a military re-enactment group, donned their Confederate uniforms and helped dedicate a serious marker sent to Canada by the American government.

“The US government will send headstones anywhere in the world where American veterans are buried,” said Brown.

She has compiled a list of Civil War veterans who lie in Canadian graves, along with biographical information on each veteran. Where possible, she has verified their Civil War service through US military records.

She hasn’t been able to verify John Glenn’s military service, but says local histories indicate he was involved in the Civil War, first as a southerner, then as a “galvanized Yankee” — a southerner who switched sides.

Glenn and his wife, Adelaide Belcourt, settled along Fish Creek in 1873, and are considered Calgary’s first non-aboriginal residents.

Accounts indicate the Irish-born Glenn was drafted into the Confederate Army at Waco, Texas, in 1861, and then deserted near Vicksburg, Miss., because he did not condone slavery. He apparently later joined the Union regiment.

He died of pneumonia in 1886 and is buried in the pioneer section of St. Mary’s Catholic Cemetery in Calgary.

Historian Hugh Dempsey said it would be natural for Civil War veterans to find their way to Alberta.

“In the settlement period, there was such a large migration of Americans here,” he said. “There certainly would be Civil War veterans among them.”

Not all were savory characters. as the Civil War ended, the whiskey trade was beginning.

“Some soldiers didn’t want to go home when the war was over,” Dempsey said. “A lot of drifters decided to go out west.”

Dave Akers was one of those, apparently, although Brown hasn’t turned up official records for him. He is said to have deserted in 1864.

Akers was the owner of Fort Whoop-up near present-day Lethbridge when the North West Mounted Police arrived to drive the American whiskey traders out of Alberta in 1874.

Akers was shot and killed in 1893 as he got off his horse at Tom Purcell’s ranch in Pothole Coulee near present-day Magrath. Apparently he and Purcell had had a dispute over cattle, and Purcell feared for his life. One account indicates he served a three-year sentence for manslaughter.

two Civil War veterans are known to be buried in Calgary’s Union Cemetery.

Brown is unsure when Gowen came to Calgary, but believes he followed his children here. He died in 1910 and is buried in the Evans family plot.

The northerner in Union Cemetery is Francis Marion Hall, who served in the 5th Illinois Cavalry. He came to Alberta in 1903 and lived at De Winton, Hanna, Gleichen and Lawnsburg near Three Hills. He died in 1916 in the Calgary General Hospital.

Brown says about 60,000 Canadians served on both sides in the US Civil War.

One of those was Quebec-born Edmond Brosseau, who served with the 2nd New York Cavalry.

After the war, he tried his luck in the California and BC Cariboo gold fields before settling in northern Alberta, where he ran a dry goods business and named the hamlet of Brosseau after himself.

He took sick while on vacation in Minnesota and died at the Mayo Clinic in Rochester, Minn., in 1917. He is buried in Brosseau.

Aaron Franklin, who served with the 11th Illinois Cavalry, came to Alberta with his sons who homesteaded in the Cremona area early in the 20th century. His main source of income dele was his Civil War pension. He died in 1933 and is buried in the Didsbury cemetery.

Albert F. Miller served with the 12th Wisconsin Infantry and was discharged in July 1865. He lived in Wisconsin and Illinois until 1924 when, apparently, a widower, he moved in with a married daughter in Red Deer. He died in 1925 and is buried in the Red Deer cemetery.

Three Sherans — brothers Nicholas and Michael and their cousin, James — were Civil War veterans who died in Alberta.

Second Lieut. Nicholas Sheran enlisted in the 99th New York National Guard in New York City on July 11, 1864. After the war, he went west and worked as a whiskey trader with the Healys in Montana.

He came to Alberta in 1870 and dug the first coal mine along the Oldman River. He drowned in the Oldman in 1882; his body dele was never found.

Michael came to Alberta to take over the family business after his brother’s death. He had served with the 69th New York State Militia for a few months in 1862.

He died in August 1885 at the age of 46 years and is buried in the Holy Cross Roman Catholic Cemetery in Fort Macleod.

Michael’s death brought James Sheran to southern Alberta to run the coal business. He had enlisted in 1861 and had served with the New York Infantry.

Besides being involved in the coal business, he farmed on the west side of the Oldman River. He died in 1924 and is buried in St. Patrick’s Catholic Cemetery in north Lethbridge.

“There are probably more,” said Brown, noting she has a list of “Civil war wannabees,” men whose biographical information mentions Civil War service, but for whom she has been unable to find further documentation. 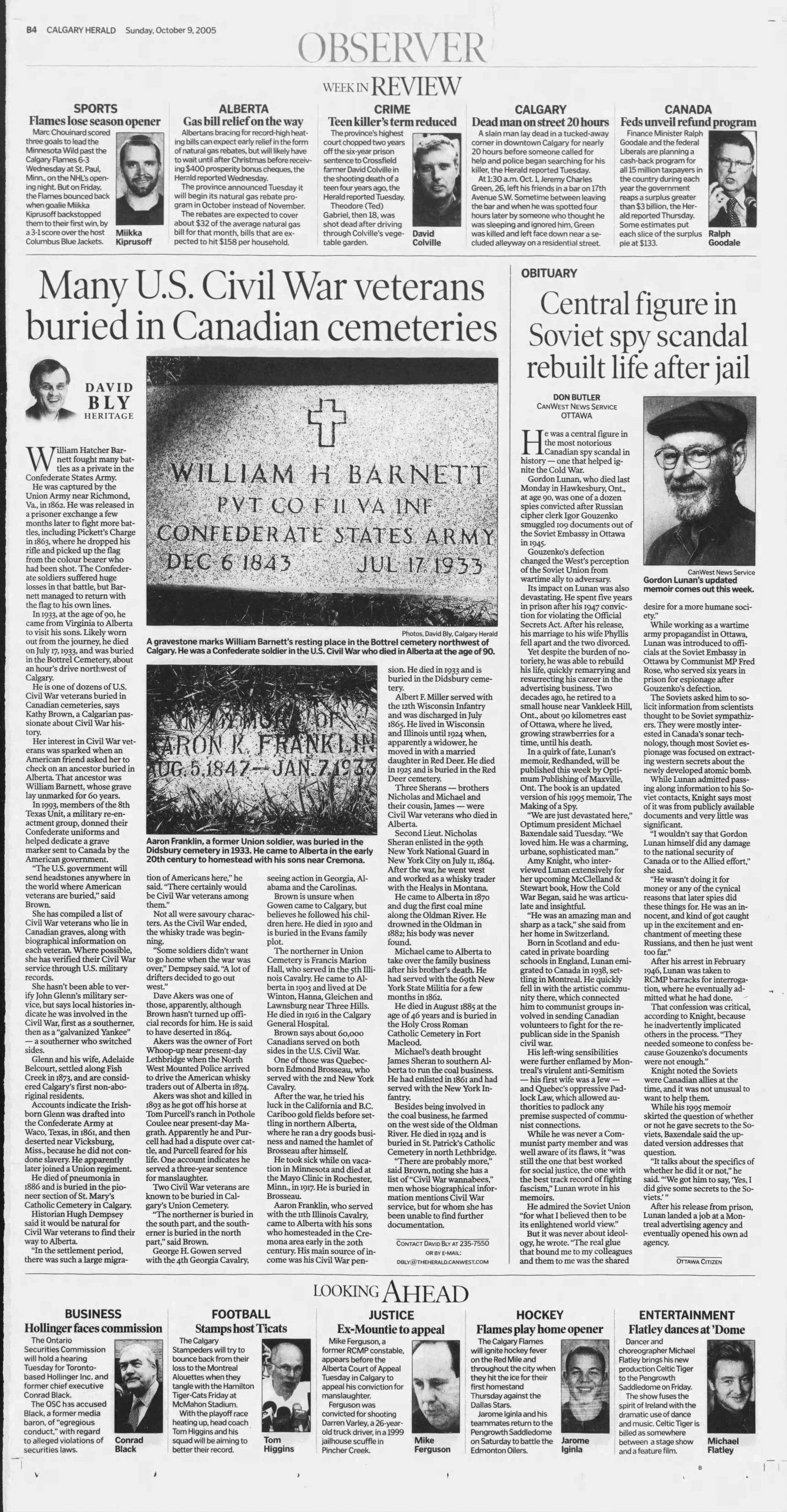 Sign up to receive daily headline news from the Calgary Herald, a division of Postmedia Network Inc.

The next issue of Calgary Herald Headline News will soon be in your inbox.