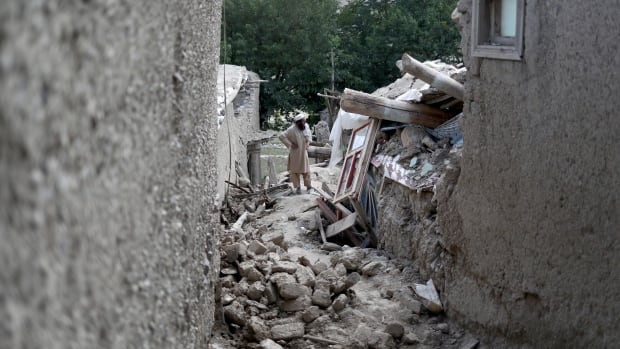 An aftershock shook a hard-hit area in eastern Afghanistan on Friday, two days after an earthquake shook the region, destroying hundreds of mud-brick homes and killing 1,150 people, according to state media.

The country of 38 million people was already in the midst of a spiraling economic crisis that had plunged millions of people into poverty, with more than a million children at risk of severe malnutrition.

Wednesday’s magnitude 6 earthquake that struck overnight as people slept left thousands homeless and brought the country’s needs into focus. Afghanistan remains isolated from the international monetary system, and aid groups lament having to pay local officials with hand-delivered bags of cash as nations refuse to deal directly with the Taliban.

Aid organizations such as the local Red Crescent and the World Food Program intervened to help the most vulnerable families with food and other emergency necessities such as tents and mattresses in Paktika province, the epicenter of the earthquake, and in neighboring Khost province.

Discrepancy in the number of dead

The United Nations Office for the Coordination of Humanitarian Affairs estimated the death toll at 770 people.

It is unclear how the death toll is being reached, given the difficulties of access and communication with the impacted villages. Any one of the grim tolls would make the quake the deadliest in Afghanistan in two decades.

Location of the original earthquake earlier this week:

The roads in the area are so poorly paved and difficult to navigate that some villages in the Gayan district take a full day to reach from Kabul, even though it is only 175 kilometers.

In villages across the district, visited by Associated Press journalists for hours on Thursday, families who had spent the previous rainy night outdoors lifted pieces of wood from collapsed roofs and lifted rocks by hand, searching for missing loved ones. Taliban fighters circulated in vehicles in the area, but only a few were seen helping to dig up the rubble.

Countries want to channel aid through the UN, not the Taliban

Many international aid agencies withdrew from Afghanistan when the Taliban took power last August. Those who remain are struggling to bring medical supplies, food and tents to the remote quake-hit area. United Nations agencies are also facing a $3 billion shortfall in US funding for Afghanistan this year.

The Pakistani government has granted safe passage to Afghans fleeing the Taliban to a third country, including two Canadian interpreters stranded in Islamabad who have been in hiding for nearly a year. The move could accelerate Ottawa’s pledge to bring 40,000 Afghans to Canada.

The Taliban’s takeover of the country last year, as the US prepared to withdraw its troops, prompted the Biden administration to freeze about $9.5 billion the Afghan central bank has in US banks, hampering the new rulers’ efforts. to pay civil servants and import goods.

Trucks of food and other necessities arrived from Pakistan, and planes full of humanitarian aid landed from Iran and Qatar.

India sent a technical team to the capital, Kabul, to coordinate the delivery of humanitarian assistance. India says its aid will be delivered to a UN agency on the ground and the Afghan Red Crescent.