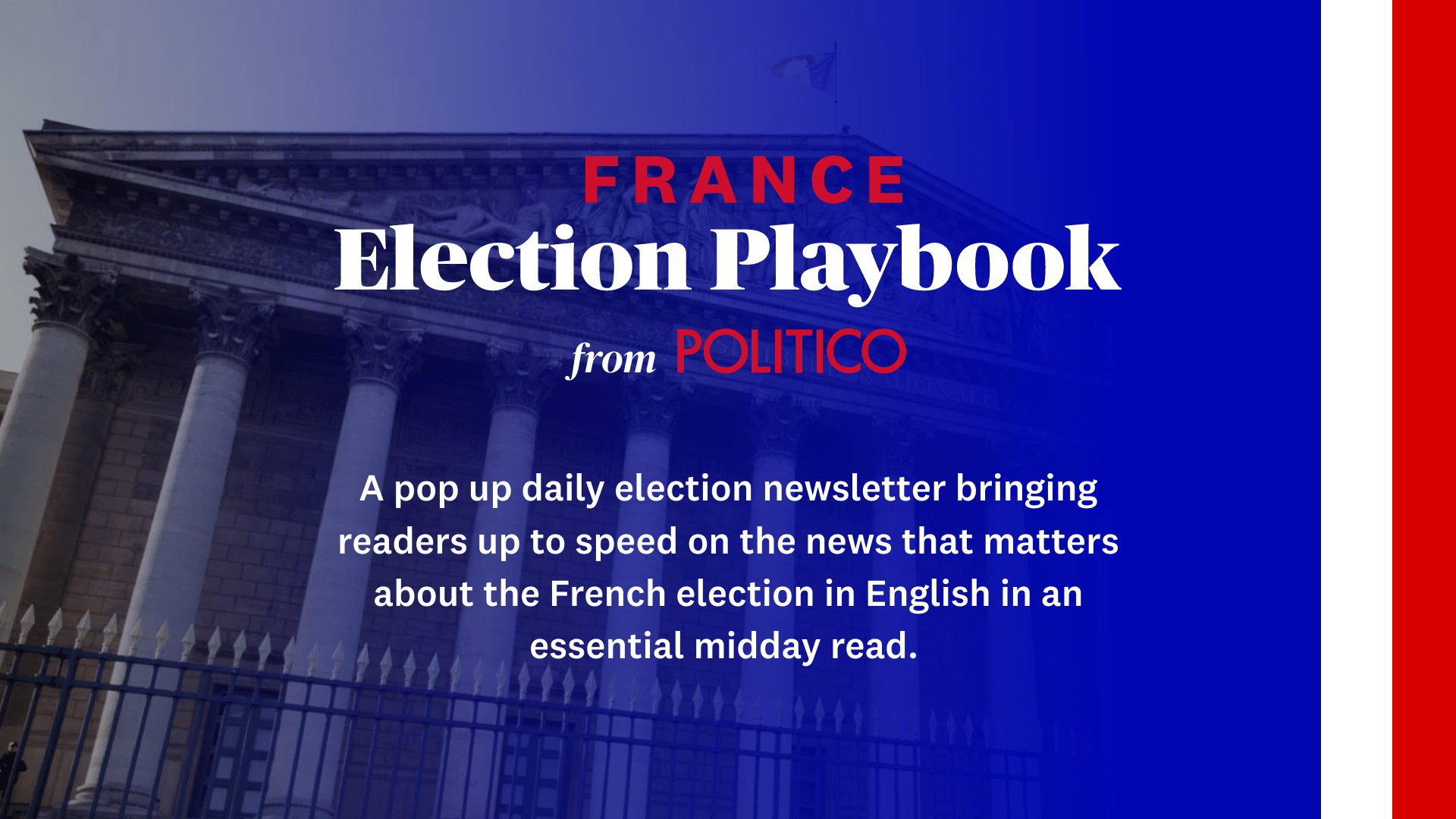 Press play to listen to this article

A pop up daily newsletter on the news that matters around the French election, in English.

Bonjour, and good afternoon. It’s Monday, April 11. Yesterday, amid the lowest turnout for a presidential election in 20 years, French voters chose a rematch of the 2017 second round, putting incumbent Emmanuel Macron first and his far-right rival Marine Le Pen second. Alongside hard-leftist Jean-Luc Mélenchon, who fell half a million votes short of reaching the second round, they are towering over a political landscape in chaos, with an ever stronger far right, a dejected left wing, and mounting uncertainty about the outcome of the second round.

The results in full: The French interior ministry has released almost complete results, only missing votes from French people abroad, which are not expected to change anything significantly. macron got 27.60 percent of the vote and Le Pen 23.41 percent. She’s followed by Mélenchon with 21.95 percent, and the gap to Le Pen got smaller all night, giving hope to his supporters until the last minute. Far-right pundit Eric Zemmour achieved a disappointing 7.05 percent, followed by conservative Valérie Pécresse with a humiliating 4.79 percent. green candidate Yannick Jadot failed to capitalize on climate change concerns and only received 4.58 percent of the votes.

stunt-prone localist Jean Lassalle outperformed expectations with 3.16 percent, doing well in rural localities. communist Fabien Roussel lost some votes to Mélenchon and only tallied 2.31 percent, which is not going to help the fraught relationship between the two. Nicolas Dupont-Aignan, the right-wing sovereigntist, received 2.07 percent. The Socialist candidate and mayor of Paris Anne Hidalgo was crushed with only 1.74 percent (she did better in the capital with, er, 2.17 percent). The Two Trotskyist Candidates, Philippe Poutou and Nathalie Arthaudend up with 0.77 and 0.55 percent of the vote respectively.

Jaded Zemmour: The former TV pundit, despite the fascination caused by his candidacy, failed to turn hype into votes. He called on his supporters of her to vote for Le Pen after he tried to overtake her with more extreme proposals on immigration and identity.

Mélenchon finishing strong: The leftist candidate once again led an efficient campaign in the final stretch and managed to finish in third place as he appeared the only viable candidate on a divided left.

Mainstream doesn’t mean anything anymore: Hidalgo and Pécresse, who ran for parties at the helm of the Fifth Republic from its inception in 1959 until 2017, won a combined 6.53 percent of the vote. It’s hard to see how they’re going to recover from this, politically and financially.

Turnout turns out ok: 74.86 percent of the French electorate showed up at polling stations, which is not as bad as most polling institutes forecasted.

WHAT NOW?: Polls conducted Sunday are forecasting a closer rematch than in 2017, when Macron got 66.10 percent of second-round votes, and Le Pen 33.90. But how close it will be going to depend on the two next weeks of campaigning.

Mélenshun: Macron is still ahead in polls, although dangerously within the margin of error zone. His success or failure will depend in part on his ability to steer Mélenchon voters towards him or at least away from Le Pen. The leftist leader vigorously and repeatedly called on his supporters to “not give one vote to Le Pen.” However, just like five years ago, he’s leaving the rest of the decision up to his voters. Mélenchon has garnered protest votes against Macron, people who could turn to Le Pen in the second round. He also got votes from a more traditional left-wing electorate that fears a Le Pen presidency more than it does five more years of the incumbent. But polls suggest a bigger share of Mélenchon voters could stay home in two weeks.

Endorsements left and right: Yesterday, Pécresse, Jadot, Roussel and Hidalgo said they would vote for Macron with varying amounts of enthusiasm, and called on their voters to do the same with varying amounts of conviction. Zemmour and Dupont-Aignan called for a Le Pen vote. That’s 13.42 percent against 8.57, although it should be noted that voters rarely blindly follow their candidate’s instructions.

MACRON’S SPRINT: After a quiet first-round campaign with only one rally and a few trips, the incumbent is going to step on the gas, starting with visits to Le Pen strongholds in northern France. He’s going to Denain today, one of the poorest areas in the country which only gave him 14.73 percent of the vote in the first round. His rival got 41.67 percent in this town hit for decades of deindustrialization. He’s going to Strasbourg tomorrow, where he performed above his national average but was beaten by Mélenchon — the leftist candidate performed well in large cities and suburbs. And Playbook Paris reports Macron should also be visiting Le Havre in Normandy, whose mayor is none other than his former prime minister, Edouard Philippe. Mélenchon also came first in the port city.

LE PEN’S QUIET MONDAY: In the wake of a triumphant election night, Le Pen has yet to set out her battle plans for the next two weeks. This afternoon, she will only be meeting her campaign team, which is fearful of a repeat of 2017, when their burnt-out candidate botched her second-round debate. The big face-off is expected to take place, as usual, on the Wednesday before the vote — April 20. She’s expected to do a couple of TV and radio hits tomorrow, as well as a press conference on “democracy and the exercise of power,” Playbook Paris reports.

Fishing on the left bank: According to l’Express, Le Pen amended her main speech at the last minute yesterday, in light of Mélenchon’s strong score. The far-right candidate mentioned “social justice and protection,” promising “solidarity for the most vulnerable” and criticizing “the power of finance.”

MONEY MATTERS: It was a pretty cheap evening for the French state, since only four candidates managed to get more than the 5 percent threshold guaranteeing reimbursement of campaign spending up to €8 million. Candidates under the line only get about €800,000 back, which means some underperforming candidates are now in dire need of money. The Greens’ Jadot pleaded to his supporters to donate to his campaign, which took out a €8.5 million loan according to BFMTV. Pécresse, who is 74,000 votes short of the 5 percent bar, made the same plea this morning, telling reporters she was “personally indebted up to €5 million.”

BOOMER BOOMING: One of the behind stories details from pollsters is the clear-cut generational gap in voting behavior. Cornelius Hirsch, POLITICO’s data analyst, took a closer look and found in an Ipsos analysis that the strongest age group supporting the far-right is the overlap between Gen-X and the baby boomer generations.

TIRELESS RETIREES: Macron’s election night was better than expected, thanks to the support of the oldest voters, a group that consistently has the highest turnout rates in elections and which has abandoned the former governing parties — the Socialist Party and Les Republicains — which now have to be bundled together with other small parties under the tagline others in our charts.

YOUTH OUT OF BOOTHS: Also striking is the popularity of Mélenchon and Le Pen with the youngest age cohort, a group with which Macron has trouble. But the first choice for this group was to not vote at all. Abstention was particularly high among younger voters, a pattern seen in other elections and in other countries.

— EU and NATO leaders are in for a couple of stressful weeks ahead of a second-round result that could radically change the face of French diplomacy, Clea Caulcutt reports.

— Eric Zemmour’s campaign is being investigated by the French data protection agency texts targeted at the Jewish community. Religious targeting is forbidden in political campaigning in France, but the campaign argues it targeted people “interested in anti-Semitism issues.”

— The Paris radio antenna for France Inter was highjacked during election night, broadcasting a message against “politicians,” “technocrats” and “journalists” to listeners in eastern Paris.