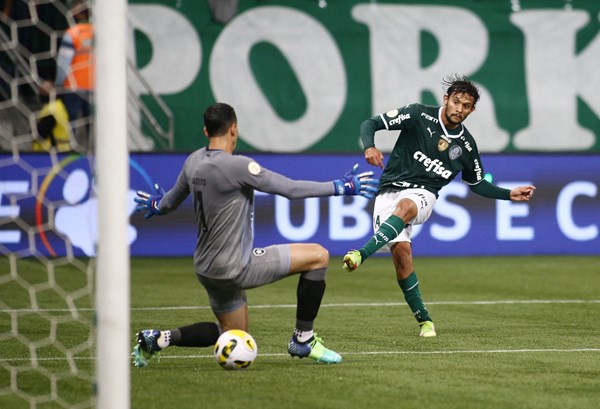 Sao Paulo (DPA)
Palmeiras took the lead in the Brazilian Football Championship, after beating Botafogo 4-0 in the tenth stage of the competition.
In two other matches, Curitiba drew 1-1 with São Paulo and Fortaleza drew with Goiás with the same result.
Palmeiras advanced with three goals in the first half, scored by Ronelson Barbosa, Gustavo Scarpa and Ronaldson Barbosa, in the 11th, 18th and 33rd minutes, then Wesley added the team’s fourth goal three minutes before the end of the match.
Palmeiras raised their score to 19 points alone, at the top, one point ahead of Corinthians, while Botafogo’s balance froze at 12 points in fifteenth place.
São Paulo drew 1-1 with hosts Curitiba, adding 15 points, in fifth place, with goal difference against Curitiba.
São Paulo advanced with a goal from Jonathan Kairi in the fourth minute, and Curitiba equalized with a goal from Alif Manga in the 59th minute.
Fortaleza also tied with Goiás at 1/1, taking the former to six points in the last twentieth place, compared to Goiás in thirteenth place by 13 points.
Iago Pikachu advanced to Fortaleza in the 13th minute, then Goiás equalized with a goal by Pedro Raul in the 87th minute.